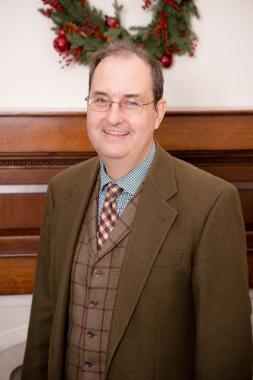 Only the world’s top scholars get the opportunity to edit an Oxford Handbook. The reference books consist of essays by leading scholars and are considered definitive resources on a discipline or topic.

When Oxford University Press reached out to Dr. Tim Larsen about editing a volume, he decided to develop a resource about Christmas, which he calls “a dream subject to read and think about.” His handbook, The Oxford Handbook of Christmas, will be released in 2020. In the meantime, he shares some fun facts about Christmas and his discovery of an important historical artifact.

What is the main concept of the book?

Its goal is to be as comprehensive as possible. There are 45 chapters, all written by area experts, on every major aspect of Christmas you can think of—from the theology of the Virgin Birth to the phenomenon of Christmas TV show specials, from the Magi and the swaddling clothes to food customs and decorations.

The book emphasizes worship a lot more than I think many other editors would have done. There is a whole section on “Worshipping Communities,” which has chapters on everyone from Catholics to Calvinists.

Did you discover anything surprising during your research?

Yes. Alex Callaway, a graduate student in the M.A. in History of Christianity program, assisted me in my research for the book and introduced me to databases of newspapers from the 19th century. This allowed me to discover a commercial Christmas card that appeared earlier than the one that every book had said was the earliest for over a century now. My card is from 1829; the race is on to see if someone can find an earlier one!

Here’s another one: Some people think of Santa Claus as competing with Christian emphases of Christmas, but historically it was deeply Christian people who spread the news of Santa. “’Twas the Night Before Christmas,” which introduced St. Nick as we know him today to many people for the first time, was actually written by a professor of Old Testament at a seminary. Originally, if you wanted to buy a Santa suit you had to order it from a Sunday School supplies company. The Salvation Army also did a lot to raise the profile of Santa. I argue that there are deeply Christian reasons for this emphasis on Santa Claus. (Hint: see Matthew 6:3-4).

What are some other events or figures covered in the book?

I’ve included nine chapters in a section on “Christmas Around the World,” which is an especially interesting part of the book. As the song goes, “Do they know it’s Christmastime at all (in Africa)?”  The answer is definitely yes. In Japan, a popular Christmas tradition is eating KFC (Kentucky Fried Chicken), and it is considered a big date night, more like our Valentine’s Day.

How would you describe the takeaway from this volume?

As I explain in the epilogue, it is completely wrong to worry that Christmas is somehow “pagan.” You can read that section in the Handbook for the facts and arguments behind that claim, but in the meantime trust me and don’t worry about it. Merry Christmas to all!

The Oxford Handbook of Christmas is expected to be published in 2020. Follow the Wheaton College Graduate School on Facebook for a follow-up post about its release.

Learn more about M.A. and Ph.D. programs within the School of Biblical and Theological Studies here.