Arts in London: A Pilgrimage to Sacred Spaces

A Pilgrimage to Sacred Spaces

Mattea Gernentz ’20 is an English literature and psychology double major from Franklin,  Tennessee. In this MyWheaton blog post, she shares about her experience finding sacred spaces in unexpected places on this summer's Arts in London trip.

London is not a beautiful city. It is vast and grand and mighty and seethes with the breadth of all the bustling acts of living one can imagine, but it can hardly be called beautiful.

I remember my not-so-graceful arrival in this not-so-beautiful city quite distinctly. I was travel-worn and deprived of sleep after the lengthy transatlantic voyage, blearily tugging my two suitcases behind me (and up various flights of stairs in Tube stations), dripping sweat as a result of an unanticipated heat wave, and already substantially poorer because of a handful of bumbling travel mishaps, pondering rhythmically over and over, “Why am I here?” When even that phrase became too much for my exhausted mind, the query was whittled down to a single word: “Why?”

I could feel this question and others persistently clinging to me on every adventure: Why, exactly, had God brought me to London? It was evident to me that God had perfectly aligned my circumstances to enable my participation in the trip, and I had stepped out in faith and gratitude… but what then? What was God going to teach me or show me? Why did I have this unique privilege over someone else? My head was swirling with inquiries, and, amidst the laughter and the West End musicals and the cups of tea and the double-decker bus rides, that undercurrent of anxiety remained. It was when I finally quieted my interrogation of God and became still, ready to receive with palms upturned, that God, at last, began to speak:

Bewildered but, nonetheless, encouraged by this little mantra, I felt somewhat armed against the pressing questions I had manufactured. I began to trust more fully in God’s provision and guidance day to day, demolishing my own expectations of what I once believed my trip abroad should look like—attempting to seek out “sacred spaces,” wherever they may be. I endeavored to give myself entirely to each moment, to be wholly present—participating in my adventure abroad rather than falling into a mode of mere observation or passively allowing an experience to happen to me rather than the other way round. 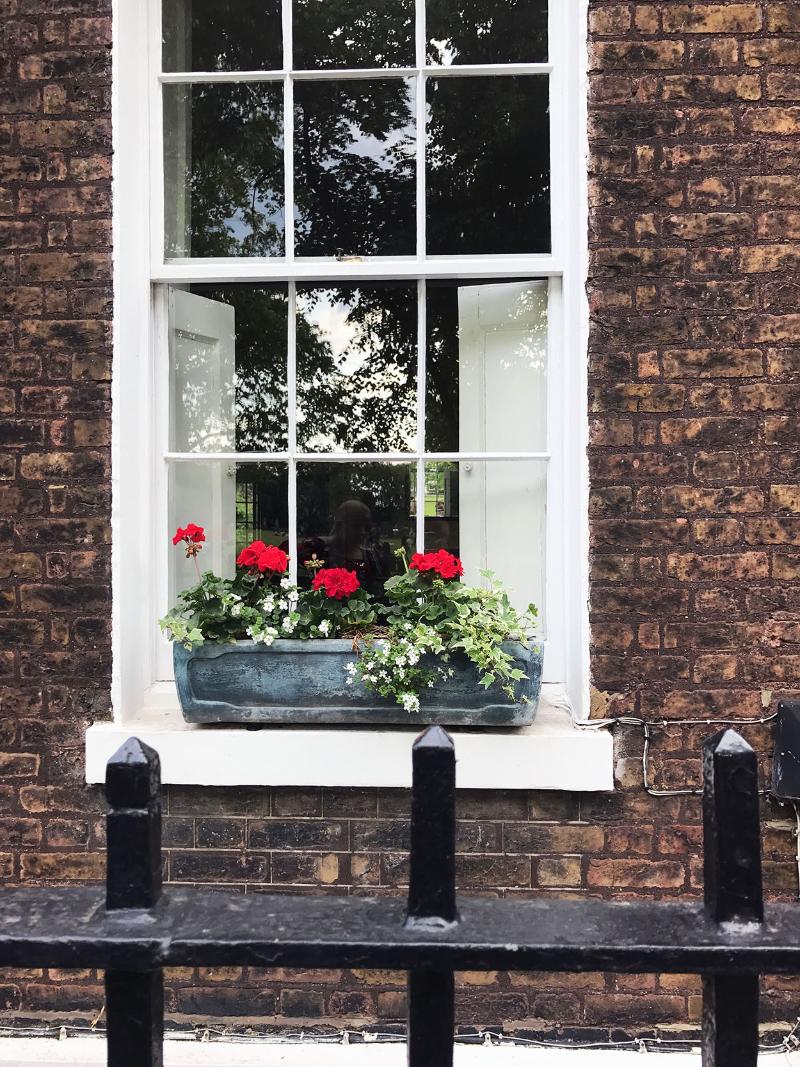 There were certainly days where I failed in my mission, but, in that failure, I found the bounteous grace, courage, and freedom to start again. The handful of carpe diem successes outshone even my greatest imaginings, and they remain dazzlingly emblazoned memories that I plan to hold dear for the rest of my life. I can vividly recall the grey clouds bursting forth with unexpected rain in Oxford and the electrifying joy that accompanied it in its descent; the acts of splashing through a plethora of puddles and marveling at the sheer Englishness of it all could only follow as the coziness and hushed peace of the ricocheting drops seemed to condense life into breathing portraiture. I remember spontaneously departing the Shrewsbury train station with friends—in the lull before our next train was to arrive—in an effort to find a nearby castle. We climbed a series of unassuming stone steps in the undergrowth without any notion of their destination, soon emerging onto a tower parapet with a sprawling view of village and river.

The memories come in a flood: of a spontaneous trip to magical Hay-on-Wye, Wales where there are two dozen bookshops full of crooked shelves and antiquated texts, of a small mouse comically racing across the aisle of the Barbican Centre to a crescendo of Beethoven’s Missa Solemnis, of meeting Christine Daaé (Kelly Mathieson) after a breathtaking performance of The Phantom of the Opera, and of gazing at works of modern art with newfound appreciation and awe (rather than sprinting to the Impressionist pieces). I will never forget Dr. Milliner’s encounter with “The Squash”—a performance art piece in the Tate Modern. As the mobile being neared, part-produce and part-circus performer, and he joined in its gentle swaying dance, depicting vine-like growth and exploration, Dr. Milliner turned to the class excitedly, with eyes wide, and said, “This is deeply illustrative of what happens when you give art time: it will come to you.” 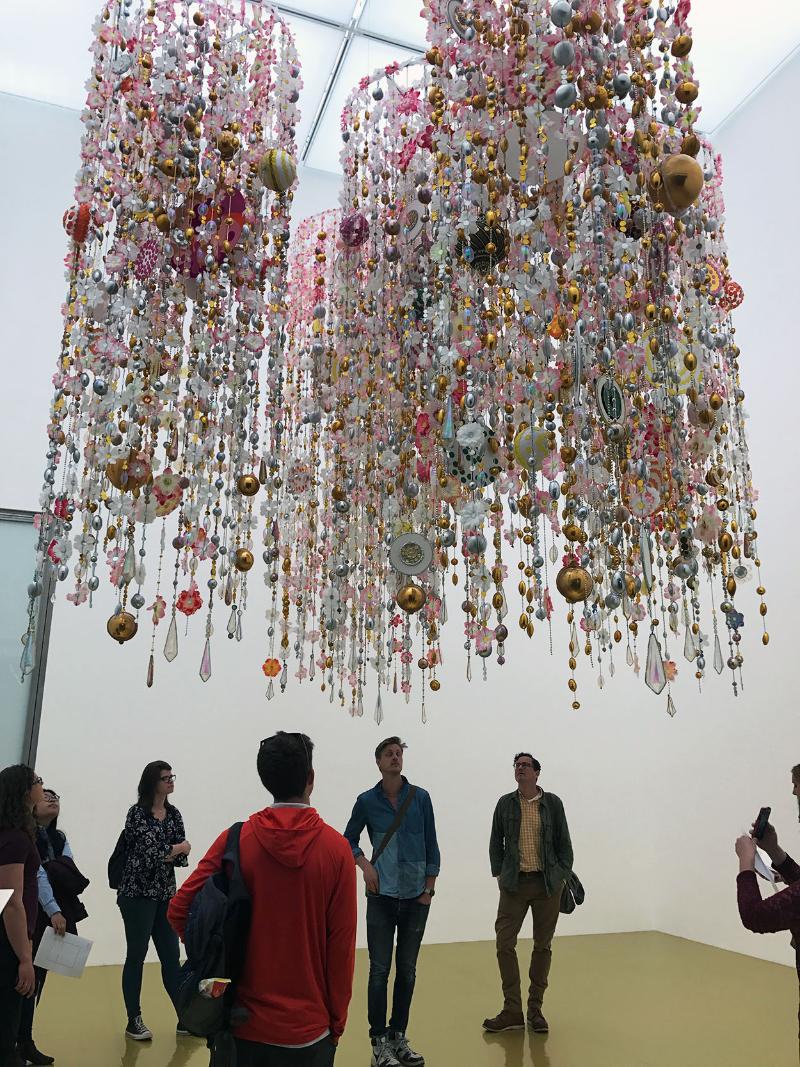 In contrast to these happenings that were pervaded with a sense of exuberant life, are the moments when I entered into Westminster Abbey and St. Paul’s Cathedral for religious services. Then, I grew chilled to the bone, feeling bizarrely distanced and suffocated. The buildings themselves were stunning masterpieces to behold, but they felt to me like empty husks, filled only with an idle whistling of the wind. I was deeply unsettled by my negative emotional response, having expected a deep reverence to emerge for the history of the faith or a personal spiritual breakthrough. I had expected these places to undeniably be “sacred spaces” because they seemed to be culturally categorized as such and yet I paradoxically witnessed God everywhere else.

I found God (or God found me) in the most unexpected of locales.

I felt God draw especially near as we hiked the lush emerald landscape of Wales and sang Welsh hymns through the drizzling rain, eventually settling in a small Pilleth church, with a holy well nestled into the hillside, for a humble communion and lecture on Celtic Spirituality. God spoke through the poems of R.S. Thomas as we intimately sat in a circle and read them aloud, savoring the strength in their simplicity and sincerity and the holiness in their humility. The Lord is not limited to our perception of what a sacred space may be. Sacred spaces are wherever God dwells, wherever we seek him. Furthermore, we are best able to discover these everyday sacred spaces by living life with childlike wonder and reckless abandon, by abiding in the scope of each moment rather than our own narrow expectations.

London is not a beautiful city, but, in many situations, I witnessed God there, working and weaving stories together in its midst, and God is beauty itself.