Responding to the Groans of Creation

Like many members of the inaugural M.A. in Humanitarian and Disaster Leadership class, Michael Sawyer brings a unique academic background, interests, and experiences to the program. Drawing from a background in environmental science and time in the HNGR program, he is able to connect his concern for the environment with his compassion for the vulnerable. 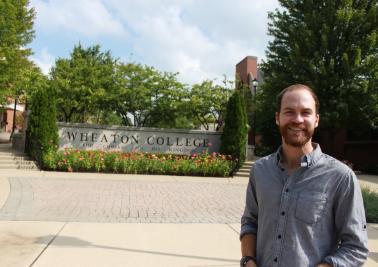 For MA in Humanitarian & Disaster Leadership student Michael Sawyer, the connection between environmental decline and escalating humanitarian disasters couldn’t be more clear. He explains, “Theologically speaking, when we ignore the groans of creation, usually there’s a relationship that will contribute to ignoring the groans of humanity as well.”

After graduating from Wheaton College with a degree in environmental science and a certificate in Human Needs and Global Resources (HNGR), Michael was searching for his next step at the intersection of environmental sustainability and humanitarian aid. “For me, Humanitarian & Disaster Leadership is the perfect fit,” he says.

Recent increases in global disasters fuel Michael’s interest. “We’re at an interesting time in history,” he says. The term “natural disaster” has become “a very vague term because... it’s all over the world.” The Economist reports that the number of disasters worldwide has more than quadrupled since 1970 to around 400 each year.

Environmental decay—from desertification to deforestation—has a direct impact on this alarming rise, as it creates conditions that can cause and exacerbate natural disasters like famines and mudslides. Poor populations are often the most affected, with no choice but to situate themselves in the most vulnerable areas, which are least likely to have adequate infrastructure and protection. A survey of the 50 countries with the highest populations of newly internally-displaced people (IDP) found that the majority of these IDPs—18 million people—are fleeing weather-related natural disasters, rather than conflict.

Michael is currently taking a course on “Refugee and Forced Migration Issues” as part of his HDL degree. He learned that people escaping weather-related disasters, sometimes called “climate refugees,” cannot actually claim “refugee” status, which is reserved only for those fleeing violence and conflict. As a result, they’re missing the credentials they need for resettlement.

This gap in refugee law has huge consequences: “It will have to change in the near future, because there will be millions of people that will be displaced from environmental catastrophe and environmental decay,” says Michael.

Last fall, Michael had the opportunity to further study issues facing refugees as he assisted Kent Annan, Director of Humanitarian & Disaster Leadership, with resources to supplement Annan’s recently-published book You Welcomed Me: Loving Refugees and Immigrants Because God First Loved Us. While he enjoyed diving into research and the theological case for welcoming refugees, he says, “I wanted to apply that [learning] to a relationship.”

Michael is currently a “friendship partner” for two local refugees in Wheaton through a program at World Relief, a major Christian refugee resettlement organization with a local office. The partnership simply means spending quality time together—“welcoming them to the United States, just being a friend.”

Each week, he hangs out with two cousins from Pakistan, who recently arrived in the U.S. as refugees. He discovered that they love cricket and says they plan to play it together sometime, though he’s never tried the sport. It will be “an opportunity for me to put the power dynamics in shift a little bit,” he said, “for me to be in a learning posture.”

Looking to the future, Michael hopes to use his learning, both from his environmental science background and his training in the Humanitarian & Disaster Leadership program, to address systemic problems. At the same time, he wants to stay grounded in relationships.

“I want my life to be characterized by compassion,” Michael says. “...I don’t want those to be just words, I want to embody them.”

Learn more about the M.A. in Humanitarian and Disaster Leadership, or about our other graduate programs in the School of Mission, Ministry, and Leadership.

Sarah Holcomb is a journalism and Human Needs & Global Resources student at Wheaton College and is originally from Austin, Texas.