Next summer, some fortunate Wheaton students will embark on a four-week tour of Denmark, Sweden, Norway and Finland as a part of the Center’s inaugural International Study Program. ISP succeeds the Iron Sharpens Iron study abroad experience, which over the last decade took Wheaties across the globe to study international political and economic systems in Southeast Asia, Central Europe, Latin America and Africa.

The study abroad program has been rechristened in honor of the 50th anniversary of its spiritual predecessor, the original International Study Program, begun in the summer of 1971 as the brainchild of Economics Chair Bob Bartel ’53. Born in China to missionary parents, Bartel carried a lifelong passion for gifting students with intercultural experiences. Leveraging contacts from his former position in Exxon-Mobil — as well as a famed knack for finding friends in high places — Bartel introduced Wheaton students to Nobel Prize winning economists, foreign government officials and international business people.

When Bartel led the inaugural ISP cohort across the Atlantic in 1971, the program was the first of its kind to allow Wheaties to take social science credits in an international context. Bartel’s daughter, Sarah Bartel Bradley ’80, who accompanied her parents on several ISP trips during her teenage years and while an undergraduate at Wheaton, recalls that students and faculty alike dressed for the KLM flight in their Sunday best. “My dad always sought to do something that gave life a little twist of being special. In the summer of ’71 we flew over in a 747, which was a pretty new experience at the time. Girls wore dresses and men wore suits to fly in a 747.”

The students spent the next six weeks in Wassenaar, a quaint suburb of The Hague on the western coast of the Netherlands, where they studied from the comfort of an old mansion built by Dutch traders. Weekdays were reserved for classwork, with the exception of Wednesdays, when students went on field trips to embassies, government buildings and cultural sites. On weekends, students traipsed the woods and ponds of the eight-acre estate and explored the Dutch countryside. At the end of the six weeks, Bartel chartered a bus and took the students on a two-week odyssey through Germany, Austria, Switzerland, France, Luxembourg and Belgium, concluding in a ferry trip across the English Channel. In the course of their travels, students took a steamboat down the Rhine, rode a cable car up Mt. Pilatus in Switzerland and visited the NATO headquarters in Brussels.

For many students, ISP was the experience of a lifetime. FPE Director David Iglesias remembers his ISP summer well. “I hadn’t given much thought to the failed nature of communism until I visited Berlin in 1978 and walked in both East and West Berlin. The dramatic difference made me realize that capitalism worked and communism did not.” For Mark Mooney ’77, the summer abroad was his first experience outside the United States. He fondly recalls biking the Dutch countryside and visiting Spain with friends near the end of the program. “My four years at Wheaton were some of the best years of my life and the ISP program — and this will sound corny — was like the icing on the cake.” Over the years that Bartel led ISP between 1971 and 1979, the program drew students from a broadening range of disciplines. Bartel was often joined in leading the program by Psychology Chair Dr. Charles Henry. In the Netherlands, psychology students benefited from access to state-of-the-art mental hospitals. “In the United States, you’d find a ward of forty or fifty people sitting around in rockers and easy chairs, doing nothing,” Henry remembers. “Back then the Netherlands were way ahead of the US. We always hear about how great America is, and it is great, but it’s also good for students to see when other countries are doing something differently, or even better.”

The ISP story would not be complete without mention of Bartel’s wife and constant companion, Shirley Bartel ’52, who helped plan and run ISP trips each summer, and served as a house mother to hundreds of Wheaton students over the course of the nine years she and her husband led the program. Mrs. Bartel was also instrumental in arranging logistics in the pre-digital world of the 1970s. “There weren’t even faxes yet. I can’t even fathom how you put together a program for fifty-some people — meals and housing and speakers — all through either telephone or letters,” Bradley remarks.

The Bartel family left Wheaton in 1980 for Westmont College in California, but the ISP program continued for several more years through the efforts of Emeritus Professor of Political Science Dr. Mark Amstuz, who led the program until 1987. “The close relationships I developed with ISP students were a highlight of my time at Wheaton, but the amount of energy required by the program director was nothing short of extraordinary; I didn’t truly start doing scholarship until I stopped leading the program.”

ISP returned in spirit, if not in name, in 2010, with the inauguration of the ISI program. Like its predecessor, ISI offered Wheaton students a glimpse of the wider world, access to leaders in business and government and above all, a once-in-a-lifetime opportunity for deep relationship building with friends and faculty. With the return of the program to its original name, the newly minted ISP will carry forward in the intrepid spirit of its founders. 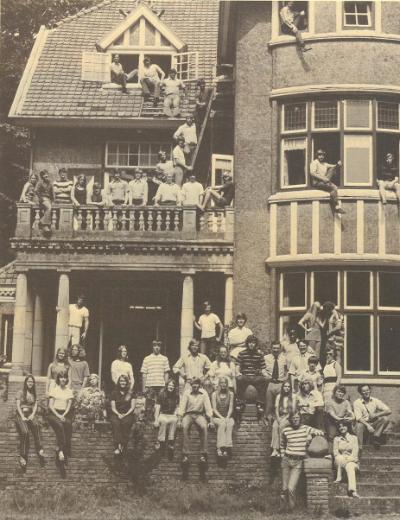 ISP students and program leaders outside the mansion in Wassenaar. Bob Bartel and Dr. Amstutz pictured right, in dark and light ties respectively. From The Tower (Wheaton yearbook), 1973.

Related article about the ISP trips by Capt. David Iglesias, Director of the Wheaton Center for Faith, Politics and Economics