Wheaton College Professor of Communication Emerita Dr. Myrna Grant started a new scholarship to help Wheaton students who are either from refugee backgrounds or developing countries or who intend to work with refugees or in international relief capacities. 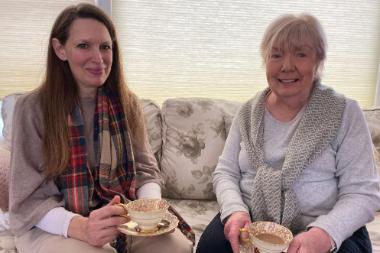 One afternoon in 1970, Dr. Myrna Grant, professor of communication emerita, was washing dishes at home and listening to the radio when she heard a story about Christians being persecuted in the Soviet Union.

Grant looked through the phone book, found the number for the Slavic Gospel Association in Chicago, and called to find out how she could help.

Soon after, Grant used her expertise as a writer and communicator to pen publicity materials for the association’s cause against the persecution of Russian Christians.

“This is absolutely characteristic of Myrna,” said Dr. Sarah Borden, a good friend of Grant’s and the chair of Wheaton College’s philosophy department. “She has both the ready willingness to help where she sees a need and the wisdom to be thoughtful about how to do so effectively.”

Grant has continued to help others by funding the Myrna Grant Family Scholarship for Refugees—an endowed scholarship that gives $1,200 annually to a Wheaton College undergraduate or graduate student who either entered the U.S. as a refugee or came to the U.S. from a developing country. Graduate students who intend to work with refugees or in international relief or development are also eligible.

“My hope is that students who receive the scholarship will be able to use it to do the Lord’s work in the world,” Grant said.

For Grant, the impulse to serve has defined her life since childhood during World War II in Hamilton, Canada. She remembers searching the streets for discarded cigarette boxes and other packages containing tin foil, which she would collect for the war effort. With her friends, she would go from door to door in her small town, asking for old pots and pans to donate.

“My friends and I felt like the war depended on us—that we were the ones who had to win the war,” she said.

This can-do spirit later propelled Grant as she completed a master’s degree in Communications from Wheaton in 1971 and a Ph.D. from Northwestern University in International Media Communications in 1986—the latter while raising four children. Grant also wrote 12 Christian books, including Vanya: A True Story and taught for 23 years at Wheaton, where she made a point to support female faculty members.

In fact, Borden has her own story of receiving Grant’s wisdom and help.

She and Grant became good friends while on faculty, but their relationship became particularly close in 2010 when Borden, who was then pregnant with twins, was nearing her due date.

As Borden and her husband were considering how they would manage childcare after her return to the classroom, Grant spoke up: “I want to take care of your kids.”

And she did. Grant retired from Wheaton in 1999 and started caring for Borden’s twins when they were about four months old.

“I know she wanted to support women faculty, and this was a concrete way for her to help,” Borden said. “And now she is basically their grandmother.”

In fact, Grant began brainstorming the scholarship as she sat with Borden’s family—which has grown from two children to four—around their raucous dinner table. While the Borden kids tested new jokes with their honorary grandma, the adults discussed the European refugee crisis.

“We should be doing something about this,” Grant said about the refugees pouring into European countries to escape persecution in the Middle East. “Something must be done.”

That “something” became the scholarship, which Borden sees as an outgrowth of Grant’s life, which is bent toward others for the glory of God: “Her combination of a warm, ready heart, and sharp, critical mind have been turned consistently to addressing so many needs around her,” Borden said.

The first recipient, announced at a November 2019 banquet, is Kailin Huang. Huang enrolled in Wheaton College’s M.A. in Humanitarian and Disaster Leadership program this year after several years of missionary and humanitarian work in Kenya, Uganda, and South Sudan.

“When Wheaton notified me that I was the first recipient of this new scholarship, I was astounded—it could only be God,” Huang said.--Emily Bratcher

If you would like to learn more about how you can contribute to the Myrna Grant Family Scholarship for Refugees, please reach out to your Regional Director of Development for more information.