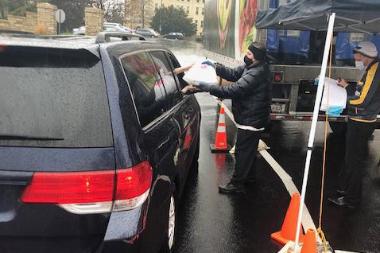 That’s the menu for the “Prime Rib Package” for six that Wheaton’s “From Our House to Yours” (FOHTY) takeaway meal service is donating to 20 local families this holiday season. This is the first year that Bon Appétit Management Company, Wheaton’s food service partner, has organized a giveaway, asking its regular customers, Facebook followers, and the College community to nominate local families who could use a delicious meal this holiday.

Although the Bon Appétit team had originally planned to enter the nominations into a drawing and select 10 at random, after reading the moving submissions, they decided to give meals to all 20 of the families nominated.

"It’s just been such a tough year for so many people,” said Bon Appétit General Manager Raul Delgado. “We’re grateful to Wheaton College that we’re in a position to give back to the community in this way."

Since 2010, Wheaton’s dining service has welcomed community members to campus to purchase gourmet FOHTY meals. Offered on Wednesdays, these affordable takeaway meals have become staples in the weekly meal rotations for many local families. This fall, in response to the COVID-19 pandemic, Bon Appétit had to stop the weekly dinners, instead offering them only for these two holidays and moving to curbside distribution rather than on-campus pickup.

Despite the change in operations, Bon Appétit is seeing a record number of sales. The Thanksgiving FOHTY orders were more than double last year’s, and the Christmas dinners are on track to be even more popular. In addition to prime rib, the menu options also include turkey breast and oven-baked ham.

Why the surge? "With more people staying home with their immediate families, but tired of their own cooking, a FOHTY meal that includes sides and dessert is a delicious, easy option," Delgado speculates. "We’re saving people the stress of holiday food shopping and cooking — and they’ll probably still have leftovers!"

There’s still time to order your FOHTY meal here — the cut-off is this coming Sunday, December 20, at 12 pm. Curbside pickup for the meals is Tuesday, December 22, from 3-6 p.m. and Wednesday, December 23, from 9 a.m. to 5 p.m. at 421 N. Chase Street, just past the Wheaton College Welcome Center.