Aspiring scientists Joshua Dunbar and Stephen McKay each won a Goldwater Scholarship, the nation’s preeminent award for students in the natural sciences, engineering, and mathematics. 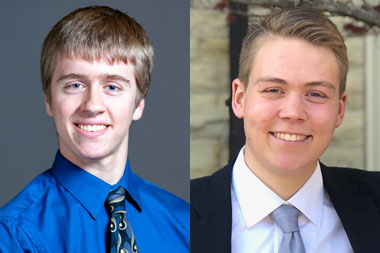 Wheaton College juniors Joshua Dunbar and Stephen McKay were each awarded the prestigious Goldwater Scholarship. Dunbar and McKay are two of only 396 students awarded the scholarship for the 2020-2021 academic year.

The Goldwater Scholarship is considered the nation’s premier undergraduate award in the sciences and includes a $7,500 award. This year’s Goldwater Scholars were selected on the basis of academic merit from a field of 1,343 students studying the natural sciences, engineering, and mathematics. Colleges and universities can nominate a maximum of four students for the scholarship.

“In the eight years that I’ve been Goldwater Campus Representative, we’ve only had two other winners,” said Wheaton College Associate Professor of Physics and Astronomy Dr. A.J. Poelarends. “The fact that both of them won the Goldwater Scholarship this year is very exciting. It also speaks of the deep investment of our faculty into students and the strength of a Wheaton education that our students are able to compete in this national competition against students from big research universities. We really do something special here and we should be proud of that.”

Dunbar, a Chemistry major, plans to earn a Ph.D. in radiochemistry and become a researcher at a national laboratory that works to make the nuclear fuel cycle safe, sustainable, and cost-effective.

“Wheaton’s rigorous academic standards have helped me realize my full potential academically,” he said. “More importantly, the tremendous mentorship I have received from my science professors has been critical in developing me as a scientist and communicator. It is an immense honor to be chosen for this scholarship.”

“In the classroom, Josh works through new material for himself; he constantly surprises me with his depth of insight,” said Dunbar’s faculty mentor, Dr. Benjamin Lovaasen, associate professor of inorganic chemistry. “In the research lab, Josh seeks to know why a reaction works and how to best optimize it. Josh is constantly making rich connections between new course material, research applications, and his own scientific interests.”

McKay, a Physics major with an emphasis in Astronomy, plans to earn a Ph.D. in high-energy physics or cosmology and astrophysics. His goal is to lead research at NASA or at a national laboratory or university that studies the nature of black holes, dark matter, and dark energy.

McKay says his experiences at Wheaton, including a research project he worked on with Dr. Darren Craig this past summer, helped him envision himself as a researcher someday.

“I was extremely impressed with Stephen’s ability to learn the necessary physics concepts, most of which he did not have any exposure to prior to the summer,” said Craig, a professor of Physics at the College. “He moved quickly from functioning as a student to functioning as a research colleague, demonstrating an ability to reason and dialogue with me at a level similar to graduate students I have worked with elsewhere. He has a bright future in science and I am happy to have had the opportunity to work with him.”

“I’ve loved the opportunities to wrestle with difficult—and often theological—questions even in math and science classes,” McKay said. “I’ve developed an interest in the deep fundamental questions in physics, which is why a potential research career—as promoted by the Goldwater award—appeals to me so much. I’m deeply grateful for the exciting opportunity to embark on a path towards research after Wheaton.”

“About a quarter of Wheaton students eventually go on to graduate school,” Poelarends said. “The Goldwater Scholarship identifies and recognizes those students who, based on their current performance, have the potential to make significant contributions to science and technology, and in that sense, directly or indirectly, to human flourishing. It is tremendously important that Christian with a mature worldview, shaped by a liberal arts education, are present in these settings, and the Goldwater provides that encouragement.”--Emily Bratcher

Learn more about competitive scholarships at Wheaton at wheaton.edu/elite-scholarships.