Dr. JoAnn Harris-Bowlsbey ’53 Recognized as 2019 Alumna of the Year for Distinguished Service to Society

For her distinguished service to society, Dr. JoAnn Harris-Bowlsbey is Wheaton College’s 2019 Alumna of the Year. The Alumni Association will honor her at an awards reception and presentation on Thursday, May 9, from 3 to 5 p.m. in Coray Gymnasium. 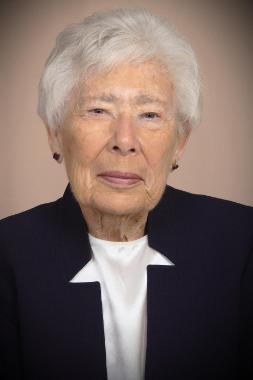 The Wheaton College Alumni Association will present Dr. JoAnn Harris-Bowlsbey ’53 with the 2019 Alumna of the Year Award for Distinguished Service to Society.

Dr. JoAnn Harris-Bowlsbey’s work in the area of career development and counseling has spanned more than six decades. Although she has held a number of roles throughout the years, ranging from a high school Spanish teacher to the executive director of the ACT Educational Technology Center, she is perhaps best known for developing a groundbreaking career information software called the Computerized Vocational Information System (CVIS) back in the 1960s, which later became known as DISCOVER.

“We look forward to having one of Wheaton’s own on campus—Dr. JoAnn Harris-Bowlsbey—who has made a real difference in the lives of countless college and university students by helping them find their true vocation,” said Wheaton College President Dr. Philip Ryken.

At the age of 15, Bowlsbey started attending Wheaton College, where her mother worked as a cook in the College’s dining hall in order to pay her way. She received bachelor’s degrees in Spanish and chemistry, while also being inducted in the College’s Scholastic Honor Society. Later, she completed a master’s degree in Spanish literature from the University of Wisconsin – Madison and a doctorate in counselor education from Northern Illinois University.

Over the course of her 65-year career, Harris-Bowlsbey has also taught at the collegiate level and served in a handful of leadership roles, including serving as president of the National Career Development Association and executive director of product development at Kuder, Inc. She has also served as a consultant to organizations ranging from Japan-based Nippon Manpower Co Ltd to the United States Department of Justice’s Federal Bureau of Prisons. Widely published in academic journals and texts, Harris-Bowlsbey has delivered hundreds of workshops to counselors at conferences and universities and created numerous versions of web-based career planning systems.

“With Wheaton’s focus on strategically preparing students for life after college, the Alumni Board thought it fitting to honor this alumna for her distinguished career helping young people discern their God–given gifts and talents,” said Cindra Stackhouse Taetzsch, executive director of the Wheaton College Alumni Association.

The Distinguished Service to Society award has been presented each year since 1953 to alumni who exemplify the mission of the College through excellence in their field of service. A list of previous awardees is available here.

The Alumni Association will honor Harris-Bowlsbey at an awards reception and presentation on Thursday, May 9, from 3 to 5 p.m. in Coray Gymnasium.

Wheaton College (Wheaton, Ill.) is a coeducational Christian liberal arts college noted for its rigorous academics, integration of faith and learning, and consistent ranking among the top liberal arts colleges in the country. Find out more information about this college.