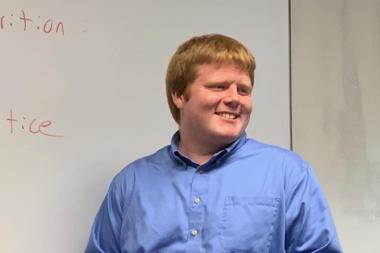 Wheaton College alumnus Marshall Thompson '15 won the Marc Sanders Prize in Philosophy of Religion for his essay, “And All Shall Be Changed: Virtue in the New Creation.”

Thompson’s essay was chosen from a pool of more than 50 entries by a group of reviewers including Dean Zimmerman, editor of the journal Oxford Studies in Philosophy of Religion. In addition to having his essay published in the journal, Thompson will receive a $10,000 prize.

“It is wonderfully gratifying and encouraging to have philosophers like Dean Zimmerman select my work for recognition,” Thompson said. “These are philosophers I have looked up to for years, and it's exciting to think that they found my work as having something valuable to say.”

Thompson is pursuing a Ph.D. at Florida State University, where his research focuses on philosophy of action, ethics, and philosophy of religion. In addition to his research, Thompson also teaches at FSU—and it was during those class preparations that he came up with the idea for the winning essay.

“In my Intro to Philosophy course we were reading an excellent article by the University of Chicago Philosopher Martha Nussbaum, in which she argues that mortality is essential to understanding human virtues,” Thompson said. “I realized I should probably have something to say in response to this paper, and so came up with this idea in trying to work out my Thursday lesson plan. I proposed my solution to the problem to the class, and many of them found it plausible and compelling, so I decided to write up the paper.”

“Wheaton places a real emphasis on the history of philosophy. This helps one both understand contemporary debates more clearly, and provides a much wider source for philosophical inspiration,” Thompson said. “It is [also] extremely valuable to study philosophy in a community with a comparatively homogeneous worldview. That is because when people share a lot of the same assumptions and starting points it allows for much deeper philosophical exploration.”—Emily Bratcher