A Great Distraction: Grace, Calling, and the Comparison Trap

This blog features stories about the Wheaton College Graduate School. Dr. E. M. Brown is Program Director for the M.A. in Clinical Mental Health Counseling and Assistant Professor of Counseling in the School of Psychology, Counseling, and Family Therapy. In this post, Dr. Brown shares a reflection on John 21 based on his insights as a clinical mental health counselor and pastor.

A Great Distraction: Grace, Calling, and the Comparison Trap

There is an intrinsic connection between our continued, experiential apprehension of grace and our ability to give up negative comparisons between ourselves and our peers. John 21 shows us a clear picture of this. Jesus doesn’t just tell us we are forgiven, he constructs living scenes and experiences in order to assist us in our apprehension of grace. John 21 also shows us, however, that the joy found in God’s grace can easily be robbed or diminished when we take our eyes off of Jesus and choose to compare ourselves to others.

[Re]Constructing the Experience of Grace

When I was nine years old, my mother’s youngest brother came to stay with our family. My uncle was only ten years older than I, and I thought he was the coolest person in the world. “Someday,” I told myself, “I want to grow up to be just like him.” While he was staying with us, we both got puppies. One day I was responsible for the dogs, and accidentally let them out of our gate while doing my chores.

I thought for sure our dogs were gone forever. I told my mother I was certain my uncle would hate me forever! I had failed my hero. I cried so much that I fell asleep, only to be awakened by my uncle himself. He told me that while driving back through the neighborhood on his way home, he had spied the dogs, caught them, and brought them home. My uncle wasn’t angry with me at all. He was forgiving, understanding, and even a little amused. I was very relieved, but I still walked around with a little guilt and shame. I still felt like I had failed.

This lingering sense of guilt and shame is a part of the issue I think Jesus is addressing in John 21. Verse 14 tells us that the meeting at the Sea of Galilee is the third time that Jesus appears to his disciples after he is raised from the dead. Some of their shame (and/or pride!) might be keeping the disciples from coming close to Jesus and receiving his grace, so one of the things he has to let them know is that, although they have sinned against him by deserting him, they are still his disciples and they still have a calling on their life. He wants them to believe that he is not holding their sin over their head, that the cross and the blood that was shed were for them too, that he wants to wipe the slate clean.

So, Jesus sees the disciples out fishing, and knowing that they have not caught any fish all night, he decides to “recreate the scene” of when he first called them to be his disciples (see Matthew 4:18-22). Just as he did when he first called the disciples, Jesus tells them to recast their nets after having not caught anything. Sure, it would be one thing for him to say that they were forgiven, but this is more than that. This is an experience of forgiveness. This experience is what we need.

It’s not enough to have a sound theology of forgiveness and grace, we need to experience it.

A month after the dogs ran away, my uncle went out of town. Before leaving he asked me to take care of his dog. This experience was my real-life way of knowing my forgiveness, when the words “it’s ok, I forgive you,” turned into real experiential knowledge, into a second chance to fulfill my responsibility. It would have been one thing for him to say I was forgiven, but to give me the responsibility to care for what he found precious and valuable—that was an experience of forgiveness.

This is what I think is happening between Jesus and Peter in John 21:15-19. Commentators make much of the three questions of Jesus, “Do you love me?” and the three calls to feed his sheep, connecting them to Peter’s three denials. Jesus is the master teacher, and he knew that he could create an experience with Peter that he would never forget. It would have been one thing for Jesus to simply tell Peter he was forgiven, but he gave Peter an experience in commissioning him to feed those whom Jesus found most precious. As N. T. Wright says in John for Everyone, our commissioning is the language of our forgiveness. When we experience God working through us, we are reminded that he hasn’t simply pardoned us from our sin, but that he delights to use us in his ministry.

As we live out our callings we are afforded the opportunity to be reminded that we are forgiven and commissioned.

Yet there are things in life that can distract us from living the experiential grace from God. There are ways of thinking, habits of the heart and mind, that distract us from the joy and love that Jesus wants us to experience. As the story in John 21 unfolds we get to see how Peter was distracted.

A Distraction from Grace

In verses 18-23, Peter falls into the trap of comparison. Jesus speaks further of Peter’s commission, of the destiny that lies ahead. and while Peter may not know everything that this foreshadowing vision entails, he knows it will not be pleasant. So, he turns around and sees “the one that Jesus loves” following them, and he asks Jesus, “what about him?” (vs. 20-21) “Jesus said to him, ‘If it is my will that he remains until I come, what is that to you? You follow me!’” (v. 23)

Jesus gives Peter this rebuke because he knows that herein lies a great distraction for Peter, and for us. You may have heard the saying that “comparison is the thief of joy.”

Comparison is also a distraction from grace.

Peter had sinned against Jesus on the night before his execution. Peter had denied Jesus three times. Jesus’s response to Peter’s sin was to recreate the scene from his initial calling, to have meal with him, and to commission Peter to “feed” – to teach—to care for the church that Jesus loves so dearly. Instead of rejoicing in his forgiveness and commission, as soon as he hears of his own future sacrifice, Peter turns and looks at John, asking, “what about him?”

I think Jesus rebukes Peter so strongly because he knows that this is a crucial moment in Peter’s formation as a disciple. Jesus knows that one of the habits of heart and mind that distract us from God’s grace and calling on our lives is comparison. Satan knows this as well, that one of the best ways that he can distract us from Jesus, from grace, and from the unique mission and purpose that he has for us, is to tempt us to compare ourselves to others.

There are few places where there is more comparison than in an academic community—further still a graduate academic community. We have countless opportunities to compare ourselves to others. Thinking back on my own academic trajectory, I remember:

A Diversion from Love

I believe the reason Jesus responds to Peter with such a harsh rebuke is because Jesus knows:

May we learn to walk in the experience of grace, to move joyfully into our own calling and commission. And, may we never look back, point the finger, or ask, “Jesus, what about him or her?” 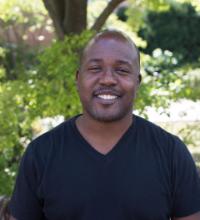 Dr. E. M. Brown is Program Director for the M.A. in Clinical Mental Health Counseling and Assistant Professor of Counseling in the School of Psychology, Counseling, and Family Therapy. He has a background in trauma counseling in hospital, college, and community agency settings. Dr. Brown's professional and research interests center around issues of interpersonal trust, multiculturalism, and trauma. More specifically, his research involves looking at interpersonal trust in relationships where there is a clear power differential such as between counselors and clients, supervisors and supervisees, and interracial relationships.

Lake in Fog Photo by Gabriela Palai from Pexels