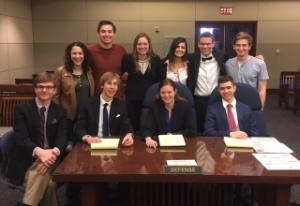 The team, captained by junior Mary Preston Austin and senior Richard Green, posted a record of six wins and two losses at the tournament. Northwestern University, Washington University in St. Louis, University of Chicago, Indiana University, and University of Minnesota will also advance to the National Championship.

“I have been constantly impressed by everyone’s work ethic and talent; the hours put in over the last couple of weeks were evident throughout the tournament,” she says. The whole team put forth some of their best performances ever.”

The National Championship Tournament will be held April 20-22 in Minneapolis, Minnesota. 48 teams will compete at the tournament, selected from more than 700 teams nationwide.

Attorney coach Brooks Locke ’98 is confident in the team’s abilities and looks forward to the opportunity to showcase their skills at the National Championship.

“Wheaton has established a reputation in the wider mock trial community for quality and professionalism, and the students have represented Wheaton College and Christ extremely well to their peers across the country,” Locke says.