Sarah Stanley, assistant professor of library science at Wheaton College, hopes to inspire a love for the archives in others. 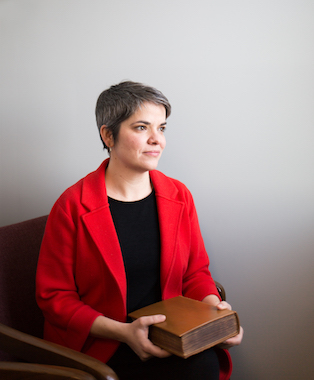 Growing up in Danville, Illinois, Stanley and her three siblings (including an identical twin sister) spent a lot of time at the local library, which was located down the road from the music studio where they all took lessons. Stanley took flute and piano.

“While some siblings were taking their music lessons, the others would go to the library and just read. The public library was very much a haven for us,” she said, adding that she devoured all sorts of books from the classics to the Chronicles of Narnia—and some Babysitters Club for good measure.

In the fifth grade, she took her first trip into an archive. Stanley had entered a speech competition and needed background on Joseph Gurney Cannon, a Danville politician who became the U.S. Speaker of the House back in 1904. Although she remembers feeling honored to even step into the archive at the Danville Public Library, she also remembers the space feeling stale: “It was a bit uncomfortable, but it was exciting because you are accessing these things that maybe other people hadn’t seen before.”

Stanley wouldn’t visit another archive until her senior year at Pepperdine University when she was researching some of her ancestors who were among Hawaii’s first missionaries. That project took her across the country to Harvard University’s Houghton Library, where she handled and read her great, great, great grandfather’s letters. “That was an incredibly special experience of sitting there and holding those materials and getting a feel for who he was,” Stanley said. Still, Houghton back in 2000 felt stuffy too.

Although she didn’t know it then, those experiences were shaping her love of archives and informing her desire to make their shelves accessible—inviting, even—to anyone with an interest.

But before she accepted a position at Wheaton College, her life took some circuitous turns. After graduating from Pepperdine, she worked in the Washington, D.C.-area for a couple of nonprofits before a mentor suggested she consider graduate school. Stanley heeded the advice, and traveled to Vancouver’s Regent College for a master’s in Theological Studies. But finding a job post-graduate school took five months during the height of the 2008-09 economic collapse. After five months, she was able to land a job in Chicago, where she worked as a receptionist at another nonprofit, but about a year into the work there, she recalled immense frustration.

“It was one of those times that I knew the Lord was with me, even if I didn’t feel it,” she said. “I just felt so desperate because I just wanted to do something but I didn’t know what it was.”

One day, she wandered into the Harold Washington Library Center, the main branch of the Chicago Public Library, which she describes as “seven floors of just wonder.” Down one of its aisles, she picked up a self-help career book. “I was flipping through it and I came across an entry for librarian, and it was just like the lightbulb went on, and I thought, ‘Of course, this is it.’”

Stanley went back to school again, this time at the University of Illinois at Urbana-Champaign to pursue a degree in library and information science. Afterward, she took a job at Westmont College, before accepting a position at Wheaton College in the fall of 2016.

Over the last few years, Stanley has come to realize there is no typical day at the college. Some days might be devoted to digital preservation, the process of ensuring that valuable digital information remains usable and accessible. Most days, she’s in talks with individuals or organizations about acquiring their papers or records, or making individual acquisitions, including books and manuscripts, among other materials) either by purchase or donation.

Those letters came from Ray Smith ’54 and Lillian Weaver Smith, the great, great granddaughter of Jonathan Blanchard, who was the founder and first president of Wheaton College.

“The gift itself is quite significant,” Stanley said. “It contains 10 original letters of the Blanchard family, and each letter helps us understand them better. We see matters of everyday concern mentioned, but also advice given about faith and even career choices.  It’s also special that the Smith family is now entrusting these treasures to us. They have been passed down through the generations as treasures, so it’s a sacrifice for them to give them up as it were.”

One of Stanley’s chief aims is to make sure that people know about the materials that the college has in its Special Collections, Buswell Library—and that they feel welcome to explore them.

“My hope is that the materials held in Special Collections will be used and enjoyed by everyone, but especially students,” she said. “We have some extraordinary materials and resources, and I think they can play a powerful role for student learning. Interacting with unique sources not only fosters a sense of wonder in the one handling them, but empowers them to make their own observations about the materials and their significance. There’s also something about the physicality that inspires a connection to the material that is unique, I think.”

Monitoring the special collections’ environment and ensuring the proper temperature and humidity levels is a daily activity, as is preventing the emergence of book worms, which “are a thing,” Stanley said, laughing. However, these worms are more akin to lice that can eat through paper or leather than the worms one might hook to a line on a fishing trip, she said.

In addition to her role as a special collections’ librarian, Stanley is also what’s called a subject librarian for the subjects of anthropology, sociology and human needs and global resources, which means she’ll also meet one-on-one with students interested in researching any of these topics.

When asked about her favorite part of the job, she said that’s easy. “Getting the primary sources into the students’ hands because there’s generally real wonder and I think joy, and I don’t think I’m overstating it, in their ability to get to handle these materials,” Stanley said.

She recalls one time getting to watch amazement wash over a graduate student as he realized he was reading an original letter written by John Wesley. Another time, she looked on as a group examined a 15th-century psalter.

“It’s a beautiful little book, but the most common comment we received by the visitors was something along the lines of ‘I can’t believe you’re letting us touch this,’” she said. “My response to statements like that is that yes, it’s a beautiful rare book, but it’s a book that’s meant to be explored and to inspire—not to hide away in a storage facility that no one can access. Of course, we need to take preservation needs into account as we are stewards of the materials, but our collections exist to be used and so we want to encourage that as much as we responsibly can.”