ET INCARNATUS EST DE SPIRITU SANCTO EX MARIA VIRGINE: ET HOMO FACTUS EST.  And was incarnate by the Holy Spirit of the Virgin Mary: and was made man. I bet your blood pressure did not even rise when you read these incredible words! Honestly and unfortunately, such a mystery awakens within most of us little more than a yawn or “O that’s nice.” 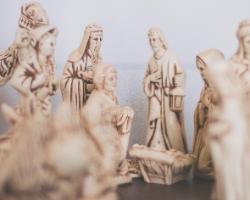 Before we rake ourselves over the coals of shame and guilt, I would say that such a bland reaction to a glorious truth is part of the fabric of being human.  It is very difficult to keep things straight, especially in grad school; to keep the important things of life from being swallowed up by the urgent.  Most of the time the choice between studying and getting the grades looms more important than Heaven and Hell.  Alas, we humans have a very difficult time keeping things straight.

That isn’t all.  We humans do not have the ability to stay very excited about anything for too long.  Whether it is some incredible grief, some great joy, some ravishing mystery we cannot sustain that emotion for long.  If you lose a loved one, you cannot cry all day; you have to stop and eat a sandwich, change your underwear, sweep the kitchen floor.  If you fall in love and are swooned into some state of ecstasy, you still must look for your keys, brush your teeth, go to class.  It doesn’t mean you don’t care, it simply means that you’re human and you can’t sustain a particular emotion for very long.

So it is with our ability to contemplate the mystery of the incarnation – “The Word became flesh…” The pre-existent Son of God, Creator of the universe, in eternal fellowship with God the Father, chose to take upon himself our humanity, not as a full-grown man but as the most helpless of the human species, a baby, completely dependent upon the very ones He created.  “For unto us a child is born; unto us a Son is given” (Isa.9:6).

I wonder what it was like to be an original disciple of Jesus?  Would I have been blinded by a halo around his head?  Would he entertain us with card tricks around the supper table at night?  Would he have boundless energy, someone who never tired, never slept, never cried, and never raised his voice?  No, I don’t believe that Jesus was masquerading as a human; he was truly human. On the one hand, the disciples were in a relationship with a very ordinary man.  On the other hand, John recorded, “and we beheld his glory as of the Only Begotten of the Father full of grace and truth.”  By his actions, by his character and by the words he spoke, the disciples came to believe that he was God in human flesh. They were not typically overwhelmed by the glory of Jesus nor were they transfixed in some permanent state of awe.  The disciples walked with him, talked with him, got frustrated with him, touched him, ate with him, and perhaps slept in the same dorm room with him.  Yet, in all of life, they beheld his glory.

And so, the mystery of the incarnation hasn’t been given to us by God “to rivet us into a paralysis of adoration” (Tom Howard) but so that we might experience the reality of God in our human condition and adore him in the ordinariness of life.  The shepherds went back to tending their flocks.  The wise men went back to that far away land.  We disciples come to the manger once a year to celebrate his birth, but we must also go back to our everyday lives -- back to grind of class, to the sorrows of life, to the uncertainty of a new year. Yet, in all of this, he will be with us and, in all of this, we must behold his glory.

Nativity Photo by NeONBRAND on Unsplash