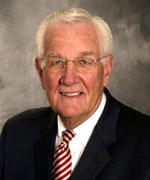 Bill Pollard joined ServiceMaster in 1977 and has served not once but twice as its Chief Executive Officer. He also served as Chairman of the Board from 1990 to April 2002 and is currently serving as an advisor to the Company.

During his leadership of the Company, ServiceMaster was recognized by Fortune magazine as the #1 service company among the Fortune 500 and also was included as one of its most admired companies. During this period, ServiceMaster also was identified as a “star of the future” by The Wall Street Journal and recognized by the Financial Times as one of the most respected companies in the world. The Company also achieved market leadership in each of its markets and substantial growth in shareholder value.

In addition to his work at ServiceMaster, Bill has served as a director of Herman Miller, Inc. and also on a number of educational, religious and not-for-profit organizations, including Central DuPage Health, Wheaton College, The Drucker Institute, and the Billy Graham Evangelistic Association.

Bill is a graduate of Wheaton College, Wheaton, Illinois, and received a J.D. from Northwestern University School of Law. From 1963 to 1972 he was engaged in the practice of law, specializing in corporate finance and tax matters, and from 1972 to 1977 he served on the faculty and as a Vice President of Wheaton College.

He is the author of the best selling book, The Soul of the Firm and also has written for or contributed to other books and magazines including The Leader of the Future, Leading People, Leading for Innovation and Organizing for Results, The Quest for the Entrepreneurial Spirit, The Leader Who Serves and The Heart of a Business Ethic. His newest book, Serving Two Masters? Reflections on God & Profit, was recently released by HarperCollins. Bill also has been recognized by a number of educational organizations for his leadership in business, ethics, and corporate governance including receiving the Hesburgh Award for Business Ethics and two honorary Doctorate degrees.

A native of Chicago, Bill and his wife, Judy, have been married for over 45 years. They have four adult children and thirteen grandchildren.