Erin Rhodes ’21 is an environmental science major from Harrisonburg, Virginia. In this MyWheaton blog post, Erin shares what she’s learned through a variety of Wheaton abroad experiences, from studying in the Black Hills to Thailand.

The grass was still wet from the rain the night before, but I soaked my boots in it anyways to cut across the quad to my class in the conservatory. I usually walk between classes with earbuds in, but this day, I was listening to the bells clatter hymns off the buildings. I also noticed an odd, cracking sound coming from somewhere nearby. I had ten minutes until class, so I stopped to look around. I ended up at the base of a tree where a large fox squirrel hunched on the lowest branch was busy splitting open the walnut grasped in his paws. I was surprised that cracking open nuts would be so loud, but actually, I don’t think I had ever watched a squirrel this closely before. I was also surprised at how gingery his fur looked, how his beady eyes stared at me unwaveringly over his squat nose, and how fat his bulging cheeks could be.  I left him on his tree branch to get to my classes, but over the day and the next week, I cherished that moment because it reminded me of why I study environmental science and how I have been changed during my time at Wheaton.

It took me back to the summer that I spent studying biology at the Wheaton Science Station in the Black Hills of South Dakota. I remember the class days we spent hiking through the pine forests and feeling the same surprise that I had never really seen ferns, grasses, and flowers before then. After taking the time to understand how plants worked, how to distinguish different families, and so many names – “Hesperis matronalis, Erigeron pulchellus, Zizia aptera” – I began seeing them everywhere! Along the path that I always walked to dinner! By the roadside! Outside laundromats and Wal-marts! Had I never looked before? Learning names and differences helped me to slow down and notice the diversity that was all around me.

That summer was also the first time I really felt like I belonged to my field of study. I had spent my whole first year agonizing over what I would major in, never thinking that I was more of a climate-warrior than anything else. Caring for creation was just something that was good for everyone to do, like taking care of your body, combatting racism, making music, solving problems, and talking about theology. How could I major in just one thing?! However, the longer I spent at Wheaton, the more I sensed that paying attention to creation and how we live in it were topics typically absent in my conversations. It’s not that my friends didn’t think that creation care was important, it’s just that not many people take the time to know how to talk about it. When I declared my major, I felt like I was closing a door on so many of my other interests, but I was excited to commit four years of time to slowing down and looking closely at what it means to be people living on God’s earth.

For me, studying environmental science has become a sort of spiritual discipline. Every day we ask first, What is the place I’m in? This includes flowers but eventually, we move on to rock types, ecological succession stages, and toxin chemical properties. The next question we ask is Who am I in that place? Where does my food come from, where does my trash go, what are the costs of how I live, and who pays them? We trace our deep connections to the soil, water, and air that support us. Inevitably, the discipline that requires me to examine my own life also leads me to look up and see my connection to others.

My summer in the Black Hills was one of the first times that I learned how to pay attention to place seriously. While I was starting to see flowers, I was also starting to see how complicated my connections were to others: what did it mean for me to be studying plants that are significant for the Lakota people when the discovery of gold deposits in the Hills had ensured that the original land treaty granting the Hills to the Lakota would not be respected by the U.S. government? Place and people were inextricably connected: history was shaped by geology; cultures were shaped by ecology. Before I could fully understand how I should love my neighbors, I had to learn to see what was really going on. 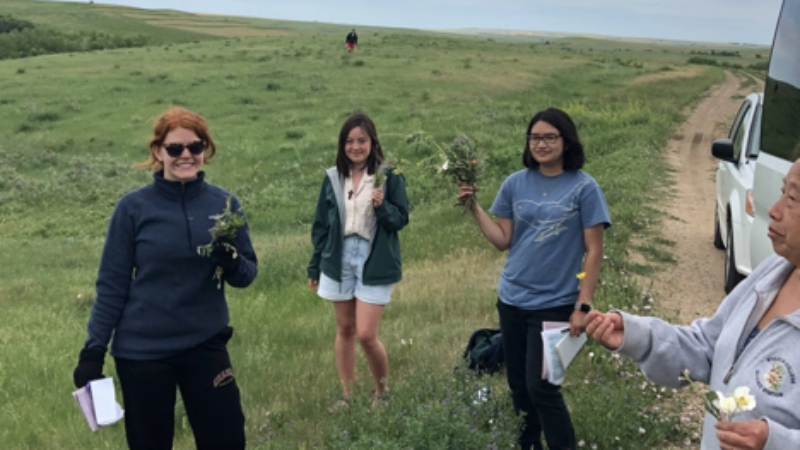 The following year, I returned to this lesson again, this time in northern Thailand for a semester studying abroad with the International Sustainable Development Studies Institute (ISDSI). I spent those four months traveling with my cohort of American students, staying with host families, eating Thai food, meeting with village members and government agencies, counting up species diversity, singing traditional music, and learning plant names—this time in Thai. I spent the trip studying what was going on between people and place. Getting answers took careful listening, lots of reading, asking good questions in interviews (in a second language), taking detailed notes, and observing what was going unspoken. Our ultimate goal in all of this careful attention was to be able to start answering, “How can we move forward in a way that is good for people and place?” In Thailand as well as the Black Hills, understanding place helped me to find my role in helping others. 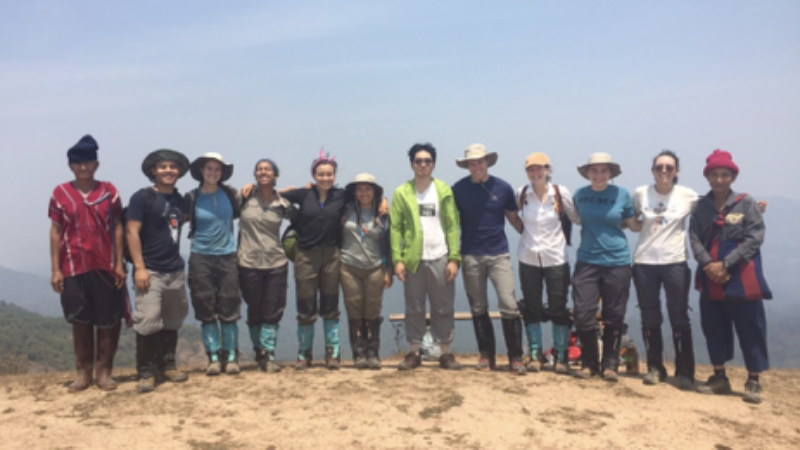 However, though studying environmental science helped me love my neighbor better, I have been learning that it is also more than that—it helps me know God as the ultimate One who pays attention. When I was learning flower names and starting to see them as beautiful in the Black Hills, I wondered if Adam felt like me as he spent his days walking around the garden naming and celebrating the plants and animals, echoing how God had looked at all He had created and called it “good, good, good.” God created not because he needed anything, but for the pure joy of beholding all the good he had made, and humanity’s first calling was to join Him. Sometimes I wonder how our perspective on creation care would be different if it was less about stewarding and more about celebrating and repeating, “good, good, good,” over creation. I wonder what it means that the choice to disobey God involved seeing the fruit not just as “good,” but as “good for food,” a commodity for human use. As a consequence, Adam and Eve started using fig leaves for clothing and each other as scapegoats for the blame. Humans hid from God because they also no longer wanted to be seen. 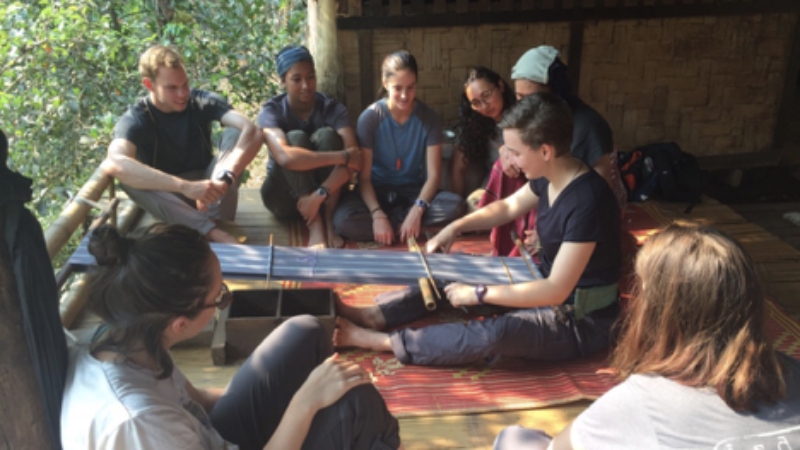 When I was in Thailand, people were surprised that I wanted to see everything. As a white person, I could have come to Thailand as a tourist, speaking English, sleeping comfortably in a hotel by the beach—why did I love learning Thai and spending time with Thai villagers? I wanted to see Thailand not just as a place that was good for me, but I wanted to see Thailand as Jesus does. One of the miracles of the Incarnation is that the eternal One came and paid attention to a particular place – first-century Palestine – as a particular person – a Jewish man, the Messiah. He spent time walking around and noticing overlooked people like Zacchaeus in the sycamore tree, the woman at the well, and Nathanael under the fig tree; not to use them, but to call them to be who they truly are—beloved children created for joy.

I realize that this means Jesus must also see all my good and all my mess. I am trying to grasp the good news that he is able to speak over me, “good, good, good.” Jesus has done what Adam could not do, fulfilling the vocation to see and love all things. Now he calls us to join him so that I am not bound to see places or people as commodities only for my benefit, but so that I can see them with the joy of creation if I will only slow down and pay attention.

Back at Wheaton for my junior year, I’m finding that college life brings back old challenges that make this more difficult. I wish I took the time to learn the names of the trees, the geologic history that has shaped this area, the fate of the native people who used to live here, and all the ways I’m connected to this soil, water, and air. I also remind myself to set down my homework to really listen to my friend telling her story and to put away my phone when I need to attend to my homework. I want to use the skills in paying attention that I learned in the Black Hills and Thailand to know this place and my role helping others here, and to see and love Wheaton like Jesus loves Wheaton. As I discern, I take heart that I am just at the beginning of this lifelong discipline and am encouraged that this includes moments of being surprised by fat squirrels in trees on the quad.