For her work in empowering the next generation, Wheaton’s Dr. Sheila Caldwell was honored with the SHE Chicago award.

Looking back over her childhood spent on Chicago’s south side, Wheaton College’s Chief Intercultural Engagement Officer Dr. Sheila Caldwell is grateful for the mentors and role models God placed in her life. 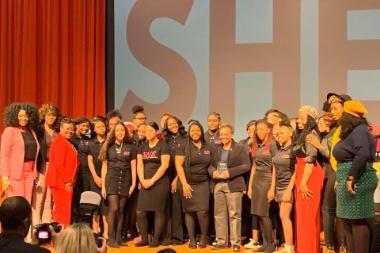 “Those experiences continue to be meaningful to me,” Caldwell said. “It was encouraging to have role models who enabled me to imagine the possibilities for my future and what I could be.”

Thirty years later, Caldwell was honored with the SHE Chicago award for being a role model herself at a ceremony, run by a nonprofit by the same name dedicated to empowering young women of color in Chicago. Other recipients of the SHE Chicago award included Chicago Mayor Lorie E. Lightfoot and Chicago Scholars CEO Dominique Jordan Turner, among others.

“It’s interesting that most us grew up in challenging circumstances on the South Side of Chicago, but by the grace of God and with the people He put around us, we were able to persist to the point where we now have successful careers and families,” she said. “It’s an honor to receive this award, but it’s even more wonderful to meet and get to know the young ladies at SHE Chicago.”

During the ceremony, each awardee delivered a speech on a different character trait or virtue. Caldwell spoke of courage, using Coretta Scott King’s life and testimony as an illustration. Caldwell was inspired by words that Dr. Bernice A. King spoke about her mother at the Rodney Sisco Symposium, held earlier this month at the College.

“I spoke about what it meant for Coretta Scott King to establish the King Center just two months after her husband was killed,” she said. “I told them that we still have people continuing to fight the good fight to make sure everyone has the opportunity to live out their God-given potential.” 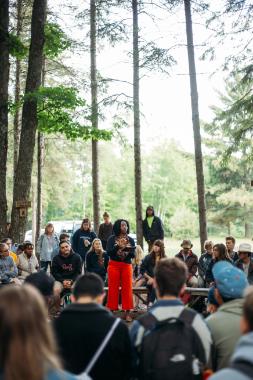 In addition to her efforts to empower young women through SHE Chicago, Caldwell also works to engender that same empowerment on the Wheaton campus through events like the inaugural Rodney Sisco Symposium that honored the life and legacy of the late Rodney Sisco ’84, the former director of Wheaton College’s Office of Multicultural Development, at HoneyRock Center for Leadership Development, where she taught and encouraged Wheaton students, and the second annual Where are the Women conference that encouraged women in their God-given callings.

When asked about her work of empowering individuals on- and off-campus, Caldwell said: “I think people are already empowered—they might just need a nudge. The best way I can think to describe it is by pointing to Hebrews 10: ‘Let us think about how we can spur one another on towards love and good deeds.’”—Emily Bratcher