Cassia Waligora is one of only 244 Boren Scholarship recipients. The Wheaton College junior spent last semester in Shanghai and plans to work in national security after graduation. 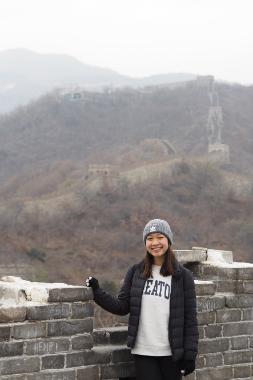 Wheaton College junior Cassia Waligora has been awarded the prestigious Boren Scholarship. As part of her award, she will begin her career by serving in a national security-related federal agency.

The scholarship, endowed by the National Security Education Program, provides funding for U.S. students studying abroad in regions critical to American national interests. This year, the Institute of International Education, which administers the Boren Awards, received 851 applications from undergraduate students. Just 244 were selected.

Waligora, who is studying International Relations and Mandarin Chinese at Wheaton, received notice of the award this fall during her semester of language study at East China Normal University in Shanghai. “I was shocked,” Waligora said. “It means a lot to have won this award—not just to me but to my entire family.”

“I owe much of my scholarship success and career aspirations to Wheaton’s Department of Politics and International Relations,” Waligora said. “Since my first year, the professors and students have all been more than willing to provide advice, support, and help.”

Professors in the department also introduced her to several internship possibilities—including one with the U.S. Department of State in Singapore, where Waligora interned the summer between her sophomore and junior years.

One of Waligora’s advisors for the Boren Scholarship, Assistant Professor of International Relations Dr. Timothy Taylor, said she is well-positioned for key roles in her field.

“Having interned in a high position at the U.S. Embassy in Singapore, Cassia has placed herself on a trajectory of public service with respect to U.S. foreign relations in East Asia,” he said. “Receiving the Boren has enabled Cassia to master a strategic language, but it’s also set her up for Christian leadership in diplomacy.”--Emily Bratcher