The 2012 trip traveled through Asia and visited several cities in South Korea and China.

The Political Economy of Asia 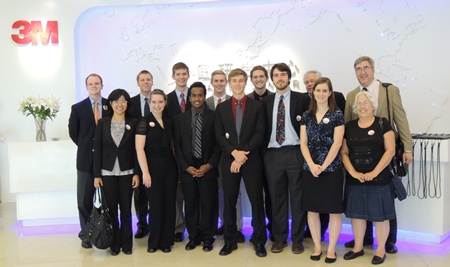 China has experienced a more than tenfold increase in GDP since 1978, making it second in the current rankings of world economies. Ten select students from Wheaton College observed this growth first-hand in an exciting 8-week immersion program uniquely blending the cultural, political, economic and business aspects of South Korea, Hong Kong and China. The students prepared for the overseas portion of the trip by first taking 8 credit hours of coursework during the month of May. This coursework included: 1) Globalization in an Asian Context, 2) Topics in Global Strategy and 3) Rise of China: Friend or Foe? The first two courses focused on the business and economic aspects of globalization, while Dr. Rachel Vanderhill’s course on the Rise of China, provided insight into some of the social and political challenges created by China’s strong rise to economic prominence. The students benefited from special guest speakers, J. Dennis Hastert, former Speaker of the House of Representatives and Mr. William Pollard, former CEO of ServiceMaster. The ISI students also had the opportunity to tour two local factories, Caterpillar Inc. and FONA, creating a frame of reference for the site visits in Asia.

The overseas portion took place from, June 4-June 30, and provided numerous cultural, business/factory, and political site visits in Seoul, South Korea, Hong Kong and China. Edd Noell, professor of the Globalization in an Asian Context course mentioned two highlights demonstrating the breadth of opportunity provided in this trip. The first highlight was the visit to GAMECO, an aircraft servicing firm, in Guangzhou, China. GAMECO is a joint venture with China Southern, a state-owned firm. A presentation by the chief marketing officer was followed by a tour of the massive hangar where a number of major aircraft were being serviced. In stark contrast, the second highlight was a visit to rice fields in the countryside outside of Chongqing, China. Here the ISI group encountered villagers washing their clothes in a pond and tending to pigs and other livestock. The ISI group benefited from a discussion with the villagers who had only seen Americans before on TV; among them was a 90 year old woman who spoke of life before the Communist revolution and others who experienced the Cultural Revolution. Students also found the trip to Baosteel an eye-opening experience. Baosteel is an enormous steel factory, containing 50,000 employees, its own police force, university, residential area and a land size larger than Macau. Students learned about China’s steel industry compared to Japan, Russia, and the U.S., did a catwalk inside one of the buildings and also visited the harbor responsible for receiving iron and shipping out steel. The political highlight of the trip was the US Embassy in Beijing, where the students received a strong presentation on the reasons for China’s current success, the challenges of American companies doing business in China, and how China and the US communicate in an attempt to work together. Cultural highlights included the DMZ in Seoul, South Korea, Tiananmen Square and the Forbidden City, and the Great Wall of China. The students also had the special opportunity to worship with brothers and sisters in Christ in a wide variety of situations beginning in some of the largest churches in the world in Seoul, South Korea and finishing with small, informal gatherings in China. The group was able to impact people for Christ and His Kingdom, illustrated by their impact on a guide who expressed desire to study the Bible after observing the student-led devotions our group held each day before their site visits. This trip was a once in a lifetime opportunity, as one of our students noted, “I learned more on ISI than I would ever have been able to in a typical classroom setting. Being able to see how businesses operate in a different culture, like Asia, firsthand was extremely valuable.”