From May 9–16, immediately following Commencement Weekend, the Wheaton College Men’s Glee Club and Women’s Chorale student choir groups set off for a whirlwind tour across Georgia and South Carolina. They spent a week performing both old and new pieces from their repertoires in private schools and historic churches, thanks to generous contributions from alumni who support music and the arts at Wheaton. 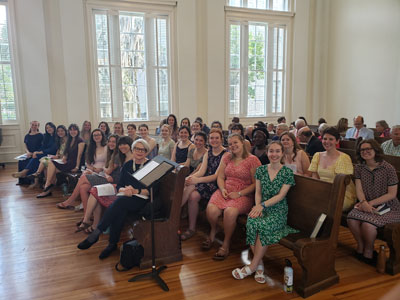 “Every detail of this tour just fell into place,” said Glee Club and Chorale Director Dr. Mary Hopper. “We could clearly see God’s guiding hand despite some unexpected logistical challenges. It was wonderful to be with the students and to witness the community and friendships they built throughout the week. Most importantly, they were able to proclaim the name of Jesus through music in these beautiful spaces.”

That divine provision was evident from day one. James Graham ’22, president of Glee Club, recalled a heightened feeling of stress as they assembled backstage after a harried day of travel to pray and rehearse. “But when we walked out into the sanctuary, a sense of complete calm came over us,” he said. “As we sang for an audience who didn’t know about the crazy logistics, or the grief of missing two years of tour due to COVID, it was powerful to see the effect that quality music can have on people.”

The tour also served as the grand finale of Dr. Hopper’s 43 years of service to Wheaton College as the director of both choirs and professor of music. Although she was unable to travel with the group until the second half of tour due to illness, student leaders shared that her influence was still deeply felt throughout the trip. “Initially, it was scary going on tour and handling the first couple days without her,” said Kennedy Walpus ’22, president of Women’s Chorale. “But Dr. Hopper has always been such a great leader and model of how we should work, both in performance and our day-to-day lives. It felt like she was there in spirit through the influence she’s had on each of us.” 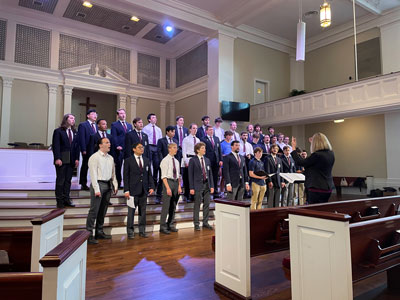 Graham shared similar sentiments about stepping up to the plate and practically applying the lessons he’s gleaned from Dr. Hopper throughout the years. “We had big shoes to fill,” he said. “When you go on tour, you have to learn how to lean on other people and recognize the talents and skills everyone brings to the table. The foundation for that was set in rehearsals, when Dr. Hopper consistently led the charge for making everyone feel welcomed and included.”

To commemorate the decades of care Dr. Hopper has poured into Wheaton students, the choirs ended each performance with a special commissioned piece written by Craig Curry ’88. First debuted at the annual Glee Club Spring Concert this past April, the project had been a surprise for Dr. Hopper, with students secretly rehearsing late at night in Armerding Hall, long after other faculty and students had gone home for the day. “It really goes to show that, for both choirs, when you love what you do and you love the people you’re working with, anything is possible,” Walpus reflected.

In the end, that piece became the final work Dr. Hopper conducted in her role as director.

“Wheaton is beyond blessed to have had someone like Dr. Hopper, and we wanted to do something big to celebrate her,” said Graham. “She was always very focused on the music, and she had high standards for us as artists and performers. But when someone was struggling with school, family loss, depression, or other difficulties, she would stop rehearsal to have us pray for this person. Time and time again, her caring heart shone through.”