During a research program at James Madison University, Wheaton College student Kevin Tully showed how math comes into the equation when grilling steak. 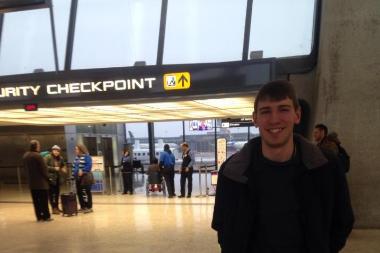 This research was a result of a Summer 2018 Research Experience for Undergraduates (REU) hosted at James Madison University (JMU) in Harrisonburg, Virginia. These competitive REU summer programs, funded by the National Science Foundation, place students with other faculty and students to work on a specific research project.

“We produced a physically realistic, computationally inexpensive model that mirrors the real-life cooking process,” Tully said, adding that they specifically investigated “pan-seared” (one-sided) and “George Foreman” (two-sided) cooking techniques. “Our main contributions were to narrow possible values for physical parameters like diffusion and permeability of the fluid—constants we need in order to uniquely solve our model—and to present a new, computationally inexpensive method, which runs relatively quickly on a computer, to account for shrinkage of the steak, which had been ignored in many previous models.”

Why study steak? Two JMU faculty members merged their interests and expertise to design the project: For instance, Dr. John Webb is a number theorist who loves to cook and barbecue while Dr. Hala AH Shehadeh is an applied mathematician with an extensive background in partial differential equations and mathematical modeling. “I was interested in the project because it sounded really fun from a real-world standpoint but also challenging mathematically and computationally,” Tully said.

The research has also opened up new doors for Tully. In January, Tully participated in the Joint Mathematics Meeting in Baltimore, Maryland, where he and his group presented their research. The group is also submitting the paper to a peer-reviewed academic journal.

According to Wheaton College Mathematics Professor Dr. Robert Brabenec, Tully is one of the math department’s stars, excelling in advanced courses semester after semester, while at the same time exhibiting humility. “He is well liked among his peers because he is so humble about his abilities and is always willing to help others with their questions,” Brabenec said.

About Tully's future prospects, Brabenec said: “I am sure he will be accepted at a variety of graduate schools for doctoral studies and will become an outstanding mathematics professor someday.”—Emily Bratcher