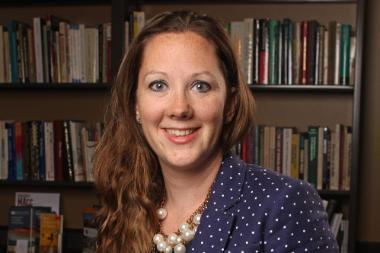 For many Wheaton College professors, earning a sabbatical means taking a break from teaching.

But Dr. Hannah Stolze has other plans. The Wheaton College Associate Professor of Marketing and Supply Chain Management will spend her sabbatical teaching at Universitas Pelita Harapan in Jakarta, Indonesia, as part of the Fulbright scholarship she was recently awarded.

The Fulbright Program dates back to 1946 with a mission “to increase mutual understanding and support friendly and peaceful relations between the people of the United States and the people of other countries.” Sponsored by the United States Department of State, the program offers research, study and teaching opportunities in more than 155 countries around the world.

For Stolze, winning a Fulbright to teach in Jakarta, Indonesia--which has both one of the largest Muslim populations in the world and a sizeable Chinese population as well--is not only the fulfillment of a dream, but also an intersection of her areas of study and her background as a daughter of missionaries in the Middle East.

During her time at Carthage College, she studied International Political Economics, Mandarin and Asian Studies—and she also spent time studying in Beijing, China. But it was her time at the University of Tennessee at Knoxville, when she was a pursuing a Ph.D. in business administration, that she really started getting excited about the possibility of a Fulbright.

“In some ways, Indonesia is positioned today where China was positioned 20 years ago when I arrived in Beijing to study,” Stolze said. “As I have watched the growth of the Chinese economy over the past two decades, I have often felt that it would have been a great advantage for there to be a business philosophy course taught in Asia that regarded business purpose beyond profit and wealth creation. In Spring 2020, I’ll have the opportunity to teach business from this vantage point in one of the largest emerging economies in Southeast Asia.”

After her Fulbright wraps up, Stolze will remain in Indonesia to complete research for an upcoming book with Zondervan, tentatively titled Wisdom-Based Business.--Emily Bratcher