At a Grand Celebration, Wheaton College announced Phase II of its state-of-the-art Armerding Center for Music and the Arts. 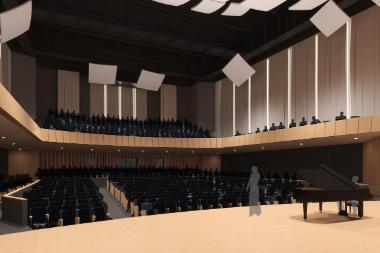 Today Wheaton College gave thanks for the work already accomplished on the Armerding Center for Music and the Arts at a Grand Celebration.

At the afternoon event, held in Pierce Chapel, President Dr. Philip Ryken, Vice President of Advancement, Vocation, and Alumni Engagement Dr. Kirk Farney, and Dean of the Conservatory, Arts, and Communication Dr. Michael Wilder celebrated the more than $58 million raised for the project and announced new initiatives related to the center.

“This event is as much about gratitude in all that God has done as it is looking forward,” Wilder said. “It’s to pause for a moment and say, ‘Wow, God is a visionary and really generous God.’”

The College expects to break ground for Phase II of the Armerding Center for Music and the Arts on February 19. This phase will include a lobby, a 648-seat concert hall, and a choral rehearsal room. When completed in August 2020, the center will be the fruition of more than eight years of planning, fundraising, and construction.

But Wheaton College aspires for the new facility—which also includes practice rooms, classrooms, teaching studios, conference rooms, and more—to be much more than a state-of-the-art facility. Through the Armerding Center for Music and the Arts—and the new fundraising initiatives related to it—the College aims to better prepare future leaders in the church to be both theologically grounded and committed to artistic excellence.

To that end, Wilder, Farney, and Ryken announced a number of new initiatives associated with the new Armerding Center.

The Armerding Center will honor its donors with named spaces, including the Debbie and Michael W. Smith Live Studio, the Marjorie Lamp Mead Art Gallery, and the Clayton E. Halvorsen Choral Rehearsal Room.

During the 45-minute Grand Celebration, Farney announced the Endow-a-Seat campaign, in which donors may give $1,000 to place the name of their choice on a concert hall seat. The first seat was presented in honor of Wilder. A new matching fundraising campaign was also announced for the purchase of an organ for the Concert Hall.

Ryken also announced the search for an Associate Chaplain of Worship Arts, a new faculty position at the College, as well as the launch of a new Certificate in Worship Arts.

“These initiatives will allow us to forge beautiful new territory with the intention to support the church and to advance the cause that Christ has invited us to,” Wilder said.

The final presentations announced the establishment of the John and Anita Nelson Distinguished Chair of Sacred Choral Music and Conducting, the first-ever fully-endowed chair in the arts at Wheaton College, and the new John and Anita Nelson Center for Sacred Music. Among the chief aims of the new endowed Chair and Center is the commissioning of new sacred choral works based on biblical texts. “These will be formidable commissions that will serve a broad range of musicians and choral ensembles and institutions around the world,” Wilder said.

“I want to say how grateful I am to a large group of people,” Wilder said. “We have over 1,200 donors to this building project at this point. To those people—many of them students—I want to express just how thankful I am to them and to the leadership of the institution, who have just been beautifully visionary in how they’ve seen the importance of the Armerding Center and its artistic encouragement to everyone at the College and beyond. It’s incredible.”