Wheaton College is pleased to announce that Dr. Esau McCaulley will join the School of Biblical and Theological Studies in the Fall of 2019 as an assistant professor. 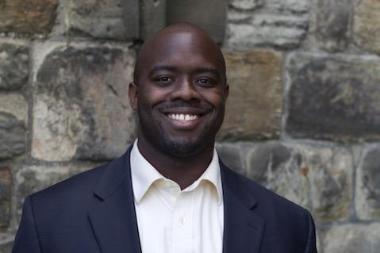 Wheaton College today announced that Dr. Esau McCaulley will join the College’s School of Biblical and Theological Studies as an Assistant Professor of New Testament. McCaulley will begin his appointment in the Fall of 2019.

He is currently working as Assistant Professor of New Testament and Early Christianity at Roberts Wesleyan College’s Northeastern Seminary in Rochester, New York.

McCaulley grew up in Huntsville, Alabama, where he said he was surrounded by men and women in the ministry, including some of his family members. By the time high school rolled around, he thought he too would pursue a career in the ministry. However, during his time at the University of the South, where he earned a Bachelor of Arts in History and Gordon-Conwell Theology Seminary, where he earned a Master of Divinity, he sensed a different call.

He realized that he might be able to make a greater impact in the classroom than in the church: “There were tons of black pastors who were doing a great job in ministry, but there were very few African American New Testament scholars, so I decided eventually to pursue a career in academia,” McCaulley said.

This led him to the University of St. Andrews in Scotland, where he earned a Ph.D. in New Testament under the supervision of Dr. N.T. Wright. His dissertation, “Sharing in the Son’s Inheritance,” will be published in April by T&T Clark.

In 2016, he joined the faculty of Northeastern Seminary at Roberts Wesleyan College in Rochester, New York as a professor of New Testament and Early Christianity. During his time there, he also organized the inaugural Call and Response Conference, an ecumenical gathering of African American thought leaders to discuss the challenges and opportunities facing African American Christians.

While teaching at Northeastern Seminary, McCaulley has also been busy writing. He is working on a book tentatively titled, The New Testament and the Hopes of Black Folk for IVP Academic on the relevance of New Testament texts to the present hopes and concerns of Black Christians in America. He’s also editing a book for InterVarsity Press titled, The New Testament in Color, which he describes as a “a multi-ethnic commentary on the New Testament.” McCaulley has also started research for a commentary on Galatians for the Word Biblical Commentary series and a shorter work on the Beatitudes for Lexham Press.

McCaulley’s appointment will officially begin this fall, and he is excited at the prospect of pursuing both teaching and writing: “I love the classroom, but I also love scholarship—and I love that Wheaton College values both."