Exploring Mars with Curiosity and Perseverance

Exploring Mars with Curiosity and Perseverance
(the rovers!) 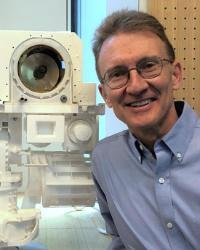 This event is open to the general public; admission is free.

Two generations of Mars rovers carry instruments that Dr. Wiens' teams have built and operated. Both instruments project laser pulses through small telescopes from the masts of the rovers to interrogate rocks and soils up to 25 feet away, acquiring optical spectra that reveal their chemistry and mineralogy. The ChemCam instrument on the Curiosity rover landed in 2012 and has fired nearly a million laser pulses and is still operating. It and other instruments on Curiosity have explored an ancient lake, finding organic molecules and quantifying constituents of Mars’ lake water and groundwater. The SuperCam instrument on the Perseverance rover is studying an ancient river delta, aiding the rover team in selecting samples to collect for eventual return to Earth. Dr. Wiens will describe both missions as well as NASA’s future plans to launch these samples back to Earth.

Dr. Roger Wiens holds degrees from Wheaton College and the University of Minnesota. He wrote the first thesis on the composition of the Mars atmosphere measured in the laboratory, sourced from Martian meteorites. He was a developer and Flight Payload Lead of NASA’s Genesis cosmochemistry mission. Subsequently, he developed and led exploration with the ChemCam laser remote sensing instrument for the Curiosity rover (landed 2012). He now leads the SuperCam instrument team on the Perseverance rover (landed 2021). With its international team, SuperCam uses three spectroscopy techniques, a microphone, and high-resolution imaging to study remote targets. Dr. Wiens is a Senior Fellow of Los Alamos National Laboratory where he developed these instruments. As of 2022 he is a professor of planetary science at Purdue University. He has been knighted by the government of France for “forging strong ties between the French and American scientific communities” and for “inspiring many young, ambitious earthlings.” He holds an honorary doctorate from the University of Toulouse and is the namesake of Asteroid 41795 WIENS. His book, Red Rover: Inside the Story of Robotic Space Exploration from Genesis to the Mars Rover Curiosity (Basic Books, 2013), describes his space adventures.