Rick is Professor of Evangelism and Leadership at Wheaton College and also directs the Church Evangelism and Research Institutes for the Wheaton College Billy Graham Center. Rick founded the Church Evangelism Institute and has worked with hundreds of senior pastors and their leaders in revitalizing churches through conversion growth. He worked in campus ministry for 25 years, and regularly speaks and ministers as an evangelist on campuses in many different parts of the country. He was the National Coordinator of Evangelism nationally with InterVarsity in the late 1990s. In addition, Rick is an ordained Anglican priest, and served for several years as a Pastor of Evangelism and Small Groups. He also helped launch the Willow Creek DuPage site, Willow Creek’s first multi-site campus. He consults widely with churches on Evangelism, Church Revitalization, Healing, Reconciliation, the emerging generation and contemporary missional churches and missional movements. Rick earned his M.Div. from Northern Baptist Seminary, studying with Ray Bakke, and focusing his studies in evangelism and urban ministry. He received his Ph.D. in Intercultural Studies from Trinity Evangelical Divinity School in 2007. Rick also serves as an affiliate professor for TEDS working with the Ph.D. program. 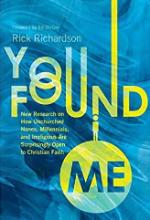 Rick has published numerous articles and six books. Evangelism Outside the Box and Reimagining Evangelism have been well received, and widely used among churches and in seminary classes on evangelism. Rick has also published four Bible discussion guides for seekers and skeptics, a book on healing prayer and a book co-written with Brenda Salter McNeil entitled The Heart of Racial Justice: How Soul Change Leads to Social Change. His latest book, You Found Me: New Research on How Unchurched Millennials, Nones, and Irreligious are Surprisingly Open to Christian Faith, presents the current new research on the unchurched and the churches reaching them.

Rick seeks to bring together his passions for evangelism, prayer and racial reconciliation in order to cast vision and equip an emerging generation and the churches who want to disciple them in ministry for the sake of the gospel of Jesus Christ.

Evangelism and Social Capital: The Bridge-Building and Bridge-Breaking Dimensions of Different Paradigms and Practices of Witness Witness: the Journal for the Academy of Evangelism in Theological Education. Rick Richardson. 2014

Emerging Adults and the Future of Evangelism Witness: the Journal for the Academy of Evangelism in Theological Education. Rick Richardson, Beth Seversen. 2014

Emerging Missional Movements: An Overview and Assessment of Some Implications for Mission(s) International Bulletin of Missionary Research. Rick Richardson. 2013

Emerging Missional Movements and Evangelism Witness: the Journal for the Academy of Evangelism in Theological Education. Rick Richardson. 2012

See School of Mission, Ministry and Leadership
Contact Us