Wheaton Professor Discovers the Force Behind the Northern Lights

New research published today in Nature Communications proves the force behind the “Northern Lights” effect of neon purples, pinks, blues, and greens, which mark the skies on certain nights around the earth’s northern and southern poles.

“Picture electrons surfing on waves,” said Wheaton College Assistant Professor of Physics Dr. Jim Schroeder, who is lead author and part of a team of physicists who collaborated on this research. “Just as a surfer gains speed on an ocean wave, we found that electrons are propelled from space toward Earth by powerful electromagnetic waves.”

For years, scientists have acknowledged that auroras were formed when electrons crashed from space into the earth’s atmosphere. A small flash of light—a photon—comes from the collision point of each electron in the atmosphere. When a shower of electrons rains down, the small flashes form a brilliant light display: an aurora. But what wasn’t well understood, according to Dr. Schroeder, was what force actually pushed those electrons down from space. 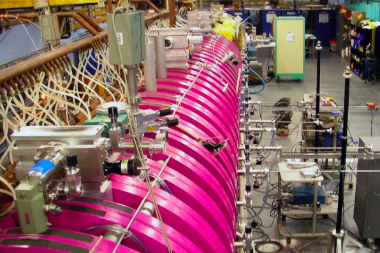 With the help of the Large Plasma Device (pictured) at UCLA’s Basic Plasma Science Facility, the researchers were able to reproduce the conditions similar to those required in space for the formation of an aurora and create a particular kind of electromagnetic wave called Alfvén waves, named for a 1940s-era Swedish physicist.

“We were able to see that the electrons really do surf on these Alfvén waves,” Dr. Schroeder said. “This finding opens up a step in the process in the formation of Northern Lights that was not well understood before.” 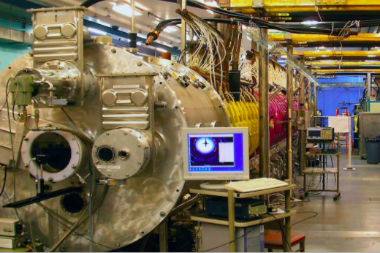 “Innovation and wonder go together,” Dr. Schroeder said. “There is arresting beauty, not only in the auroras of earth—and Saturn and Jupiter for that matter—but also in the streams of data from an experiment in a basement lab that unlock their secrets, in the team of researchers peering beyond the edge of human knowledge. There was plenty of science innovation too. We moved forward in our ability to measure and model plasmas. The next project will use techniques learned here to address questions about earth’s radiation belts, a highly radioactive region of space populated by satellites we depend for navigation and communication in daily life.” Dr. Schroeder is co-investigator on a three-year NASA grant that will fund this next round of research.

In addition to publication in Nature Communications, a peer-reviewed, open-access scientific journal, Dr. Schroeder and his co-researchers are presenting their findings at the 238th annual meeting of the American Astronomical Society.

A summary of the research is available here.


Learn More About Physics at Wheaton College
Contact Us