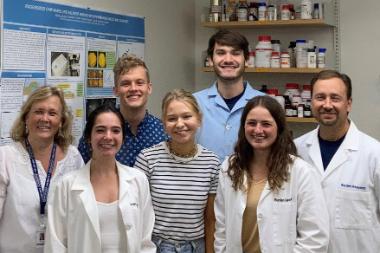 Dan, an analytical chemist, started researching the toxin protein at the National Institute of Standards and Technology. His wife Lisa, a biochemist working at the National Institutes of Health, quickly became enthralled as well. Although the protein’s ability to harm human tissues and cells, as seen in MRSA infections, is well documented, the detailed molecular function of the protein remains obscure. That gap in knowledge is what first piqued the Burden’s interest and has driven their investigative endeavors ever since—particularly since there might be ways to alter the protein for more productive purposes.

The Burdens brought this research to Wheaton, where they both teach in the Chemistry department, introducing students to this protein and teaching them how to complete the lab work and scientific journal writing associated with it.

“We have a fascination with this protein,” Lisa admitted.

Several years ago, they made an exciting discovery in the Wheaton lab. The toxin protein, which looks like a mushroom cap, forms a passageway that can be opened and shut, like a molecular valve.

This is exciting for a number of reasons, including its possible application in the field of medicine. Since they’ve figured out how to controllably open and close the protein valve, in theory it could be used to assist with delivering a drug to a particular place in the human body.

"Imagine that you have a microscopic delivery vessel containing a drug with even smaller molecular valves built into its walls,” Lisa explained. “If you wanted the contents of the vessel to be given only to a diseased organ, you could send vessels there, trigger the valves to open, and unload the contents right near the treatment site, instead of distributing the drug and its potential side-effects throughout the body.”

With this NSF three-year grant, the Burdens, along with their Wheaton student researchers, are studying in closer detail which molecules travel through the opening of this toxin protein and whether or not certain molecules remain trapped inside a simulated delivery vessel when the protein passageway is closed.

This summer, Sophia Peña, Karsten Mohn, Cole Bothun, Sophie Anderson, and Sophia MacLean all Undergraduate Research Fellows as part of Wheaton’s 10-week Summer Research Program, have been executing experiments and helping with the instrument construction phase, which will enable further study of the protein in upcoming years.

“Our ultimate goal is to understand really well how the protein works and also find new utility in it—things that it can do that haven’t yet been realized or taken advantage of,” Dan said. “As we modify the protein and study it, we are discovering new applications for this molecular valve.”