On My Sabbatical: Stephen Bretsen

Stephen Bretsen spent his sabbatical researching water law, logging some hours on cross-country skis, and completing a collection of stories and memories from his mother’s childhood. 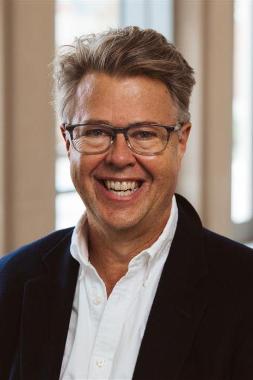 Having worked for seven busy years as chair for the Business and Economics Department, Stephen Bretsen, who is also the William Volkman Associate Professor of Business and Law, was looking forward to the opportunity to complete some water law research out West during his 2021 spring sabbatical.

Although COVID-19 curbed some of his in-person research plans, Bretsen nonetheless found ways to further his research and complete some additional unanticipated projects.

“Water law in the western United States is fascinating because it’s governed by a ‘first in time, first in right’ system,” Bretsen said, meaning that farmers and ranchers out West hold  the most senior water rights and use most of the water as opposed to municipal, commercial, or industrial users.

But Bretsen said that new legislation in states like California, Colorado, and Utah is starting to impact this prior appropriation system, which was first established in the 19th century.

For example, in Colorado and Utah, collecting rainwater from a downspout was a crime until the early 21st century to protect senior water rights. To research the constitutional law takings issue that arises when states in the western United States instead authorize homeowners to capture rainwater for residential uses, Bretsen and his wife planned to travel to the state capitals of California, Utah, and Wyoming, popping by the homes of his two daughters who live in Colorado Springs and Silicon Valley. But due to COVID-19, Bretsen has had to conduct most of his research online.

In the arid and semi-arid western United States, water rights are an economic and emotional issue that spark conflict, which has only been heightened by climate change and a demographic shift.

"The small issue of rainwater harvesting provides a means to examine larger issues about the nature of property rights in water and the continuing viability of the prior appropriation system," Bretsen said. "Both issues are at the forefront of policy debates about water as the West transitions from its historically rural and agricultural roots to a more urban society that places a greater value on residential, commercial, and recreational uses of water."

Enabling suburban homeowners to use rainwater before more senior downstream appropriators raises the issue of a government authorized taking of water rights since their seniority is their primary value. Bretsen discovered that the prior appropriation doctrine is flexible enough to accommodate rainwater harvesting without requiring state governments to compensate senior water rights holders.

Bretsen, who has previously published papers in the Texas A&M Journal of Property Law, the Fordham Environmental Law Review, and the UCLA Journal of Environmental Law and Policy, among others, is planning to submit his research for an article tentatively titled "Rainwater Harvesting Under the Prior Appropriation Doctrine: Strategies for Responding to Property Rights" in a similar environmental law journal.

While the pandemic hindered some of his in-person research plans, it also offered the chance to work on other personal projects. In addition to completing a redraft of a pedagogical article in response to a revise-and-resubmit request from the peer-reviewed Journal of Legal Studies Education, Bretsen also found time to compile and edit a collection of memories for his 87-year-old mother.

Bretsen, who is a first-generation American, grew up hearing his mother’s stories from her childhood during the German occupation of Norway in World War II, and had long wanted to commit them to writing. The completed memoirs include stories about encounters with a German SS officer in 1940, an escaped Polish prisoner of war in 1941 who was walking across the frozen fjord that separated Norway from neutral Sweden, and an American soldier in 1945 who gave his mother her first taste of Wrigley’s chewing gum. Just recently, he was able to distribute copies to his family.

“The sabbatical became the perfect opportunity to finish this project,” Bretsen said.

About “On My Sabbatical”

Wheaton College faculty members are not only excellent teachers but also outstanding scholars. “On My Sabbatical” is a new series that shares how Wheaton professors spend their sabbaticals researching, writing, and even dabbling in a hobby or two.