Wheaton College Music Professor John William Trotter launched HerVoice, a competition and mentorship program for emerging women composers of a cappella choral music as part of his work with Chicago a cappella. 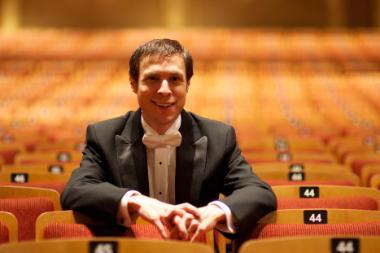 Wheaton College Music Professor John William Trotter got the idea for HerVoice after eight years of working with students.

“In the course of my time at Wheaton, I’ve performed several student choral works with the Concert Choir, each of which have come to me in different ways,” Trotter said. “Looking back, I noticed that male students were more likely to approach me directly than female students, even though the quality of work was similar."

At Chicago a cappella, a professional vocal ensemble where Trotter serves as the Artistic Director, he launched HerVoice, a new competition and mentorship program aimed at doing just that—giving a voice to emerging women composers of a cappella choral music.

What began as a modest vision focused on female Chicagoland composers quickly gained broader interest from composers, music directors, and music groups from around the country and around the world, including Grammy Award-winning Kansas City Chorale Artistic Director Charles Bruffy, who is serving as a partner and the American Choral Directors Association, who joined on as a sponsor.

Notable composers Chen Yi, previously nominated for a Pulitzer Prize, Zanaida Robles, a prominent member of the National Association of Negro Musicians, Inc., and Stacy Garrop, the chair of the panel, are also part of the committee who will work with the class of HerVoice applicants.  Everyone who submits a piece will be invited to group sessions with the composer panel, with a focus on professional development and entrepreneurial training. In addition, winners will be selected for more intensive one-on-one mentoring and the opportunity for of having their pieces performed by Chicago A Cappella and the Kansas City Chorale in the 2021-22 season.

“The scope of the program has widened,” Trotter said. “Part of that is due to timing.”

He explained that while a global pandemic is a good time to write music, it’s not a really great time to be a choral musician since singing in groups and performing concerts aren’t options.

“It’s quite important to me that we continue the momentum through this time because it’s possible that we’ll lose talent from the field if we don’t,” he said. “If you’re an established choral musician already committed to the field, you’ll probably choose to weather the COVID-19 pandemic. But what if you’re emerging or thinking about whether or not you have something to say within a field that seems to just have evaporated?”

“One odd thing about creating a new initiative is that is that you do all the work in advance to design the opportunity and spread the word, without knowing how much traction you will find in the real world,” Trotter said. “How many people will answer the call? Five? 10? 20? We figured that if we received a dozen completed applications that would be respectable, and if we got 20, that would be a big success for the first year of a new program."

HerVoice just closed the application, receiving 82 pieces written by 69 composers who are from 18 states and 11 different countries across three continents.

“We’ve discovered an exceptional class of women composers who are writing exciting new choral compositions,” Trotter said. “I’m thrilled that through this program, they’ll get to develop their music further through workshops and mentorship relationships.”