Earlier this month, Wheaton College’s Academic and Scholarly Technology team won the 2019 Innovative IT Team Award at the Council for Christian Colleges and Universities’ Commission on Technology Conference. 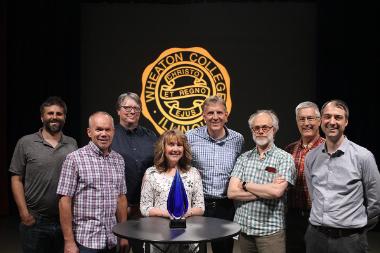 Wheaton College’s Academic and Scholarly Technology team took home the 2019 Innovative IT Team Award at the Council for Christian Colleges and Universities’ Commission on Technology Conference that was held June 4-6 at Wheaton College. The award, new this year, recognizes an Information Technology team that has worked together to reinvent itself and improve efficiencies within departments or across campus.

“I’m so proud of what this team has accomplished,” said Wheaton College Chief Information Officer and Campus Services Officer Wendy Woodward. “They have completely reinvented themselves are now viewed as partners across campus. They have done a phenomenal job.”

As an example, the team repurposed Wheaton’s Chatlos Studio, which housed the College’s former television and radio programs, into a cutting-edge multi-media environment in which faculty members can film lectures for online learning. To date, the Academic and Scholarly Technology team has helped produce more than 1,000 instructional videos. With the help of the Wheaton College Computer Science Club, the team built also a lightboard, a glass chalkboard that allows faculty members to appear to write in mid-air while they record lectures.

The team has also implemented a new learning management system and has made strategic cuts to existing programs to improve efficiencies.

“This team is just getting started,” Woodward said. “I’m excited to see how they will continue to partner with faculty in support of pedagogical excellence for our students.”—Emily Bratcher