This blog features stories about Wheaton College Graduate School. This week's story is about Joel and Shinhyoung, two students in the Biblical Exegesis program in the Bible and Theology Department.

When Joel Guzman Quispe, a resident of Wheaton, decided to pursue an M.A. in Biblical Exegesis at Wheaton College Graduate School in 2017, he was working full time, volunteering at his church, and he and his wife were expecting their first child. For students like Joel, a graduate program involved investing time he didn't think he had.  And with life so full of responsibilities, he certainly didn’t have time to add new friendships to the mix.

Shinhyoung Lee, a young pastor at a church in Seoul, South Korea, knew he needed more training in biblical languages and textual interpretation to fulfill his pastoral calling. Despite the challenges of settling in to a new country, studying in three new academic languages (English, Greek, and Hebrew), and the complications of obtaining a visa, Shinhyoung followed God's lead through the door to Wheaton's M.A. in Biblical Exegesis program. Shinhyoung and his wife anxiously began apartment and preschool hunting while grieving for the stability of home, family, and church they were leaving behind. 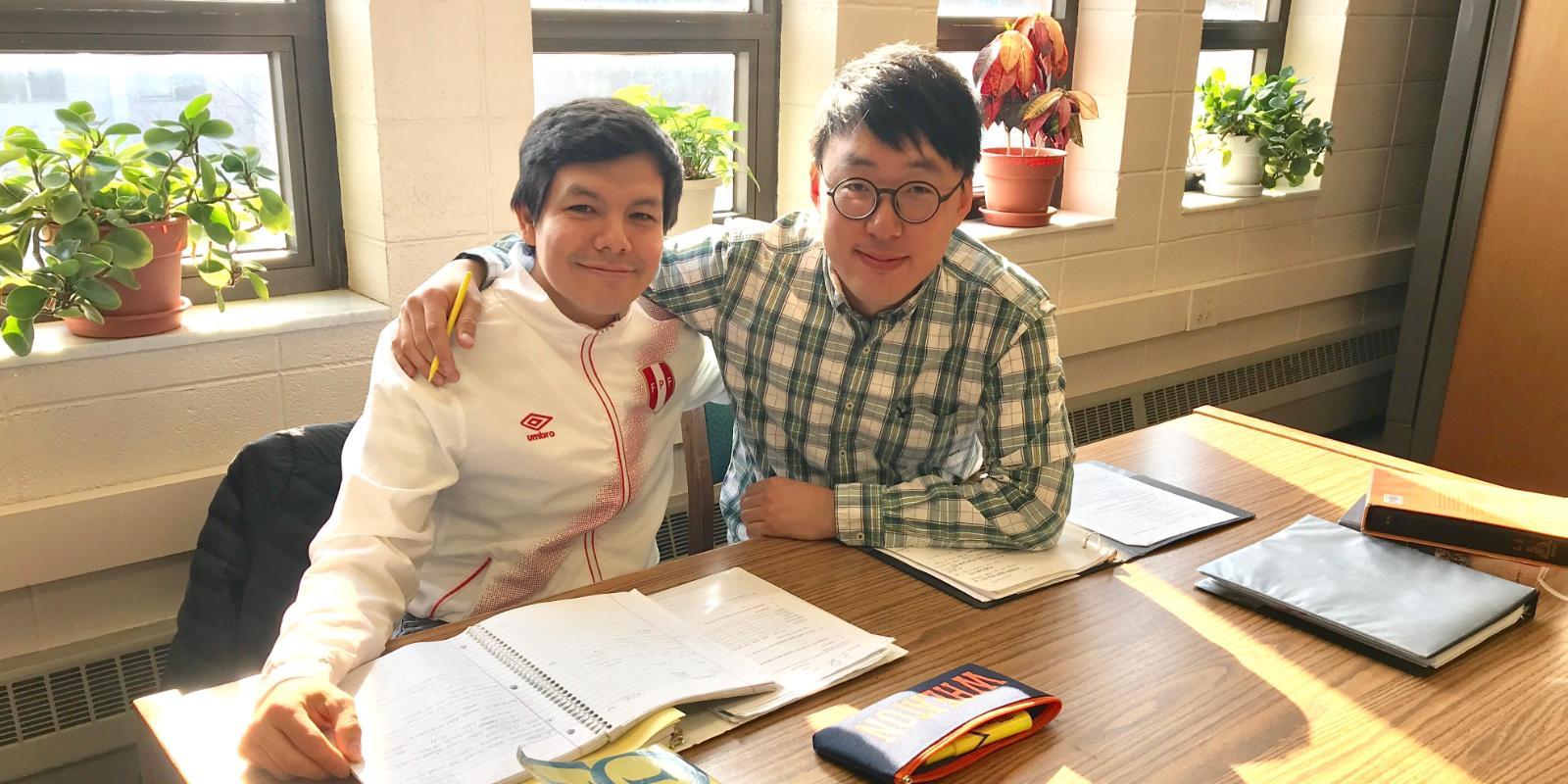 As Shinhyoung and his family arrived in the U.S. for the first time, Shinhyoung felt helpless.

"I felt like a child again, I couldn't do or say the things I wanted, but Joel invited my family to his home several times and made us feel so welcome."

"We first met at orientation," Joel says. Joel had immigrated from Peru in his early 20’s, so he knew the challenges of adjusting to a new life. "We realized we had all the same classes together, so we started studying and working together."

Thus was the birth of a lasting friendship.

Joel and Shinhyoung found that they have much in common. They are in the same concentration in their program, both are committed to working in and for the church, both are married, and both have had to experience the difficulties of adjusting to a new culture and new home.

They began studying together at least once or twice a week, sitting at a table they claim as their own, located on the second floor of the Buswell Library. "Nobody can sit there but us!" Joel laughs.

"Joel became such a supportive friend. When I find something about my new life and school challenging, I am able to call on Joel for assistance." Shinhyoung smiles, points to Joel, and makes an Old Testament joke "He's my Jonathan! I am David! He does everything!"

"He's exaggerating," says Joel. Joel remarks that Shinhyoung, whose son is already of preschool age, is able to share his parenting wisdom. "My daughter was born at the end of the fall semester, so on top of school, I am learning about being a new dad. I ask Shinhyoung a lot of questions about that!"

Shinhyoung and Joel both have a heart to serve the global church.

"When we stand in the pulpit, we don't want to put words in God's mouth. This is why we are doing this program. We want to be faithful to the text."

And they certainly are faithful scholars. As a testament to their dedicated teamwork, this semester Shinhyoung was recognized with the Excellence in Hebrew Award, given annually to one student in the Bible and Theology Department (Wheaton's largest academic department). Shinhyoung plans to bring his exegetical skills back to his pastorate in Korea, while Joel looks forward to the possibility of a Ph.D.

"In addition to serving the church directly through preaching, I also have a desire to see pastors in Latin America receive better training. Perhaps someday God will send me back to Peru, to train leaders in graduate school there," notes Joel.

For Joel and Shinhyoung, the challenges of language, homework, time, family, and ministry propelled them into a close friendship, rather than pushing them into isolation. When Shinhyoung compares their friendship to David and Jonathan, he is recalling the many examples in scripture of a friendship that is built on brotherly and sisterly sacrifice in times of stress and pressure. As they seek to excel in their family, academic, and church life, their friendship has been a source of encouragement, where struggles are both shared and understood. Jesus said it best when he told his disciples, "greater love has no one than this: to lay down one’s life for one’s friends." (John 15:13)