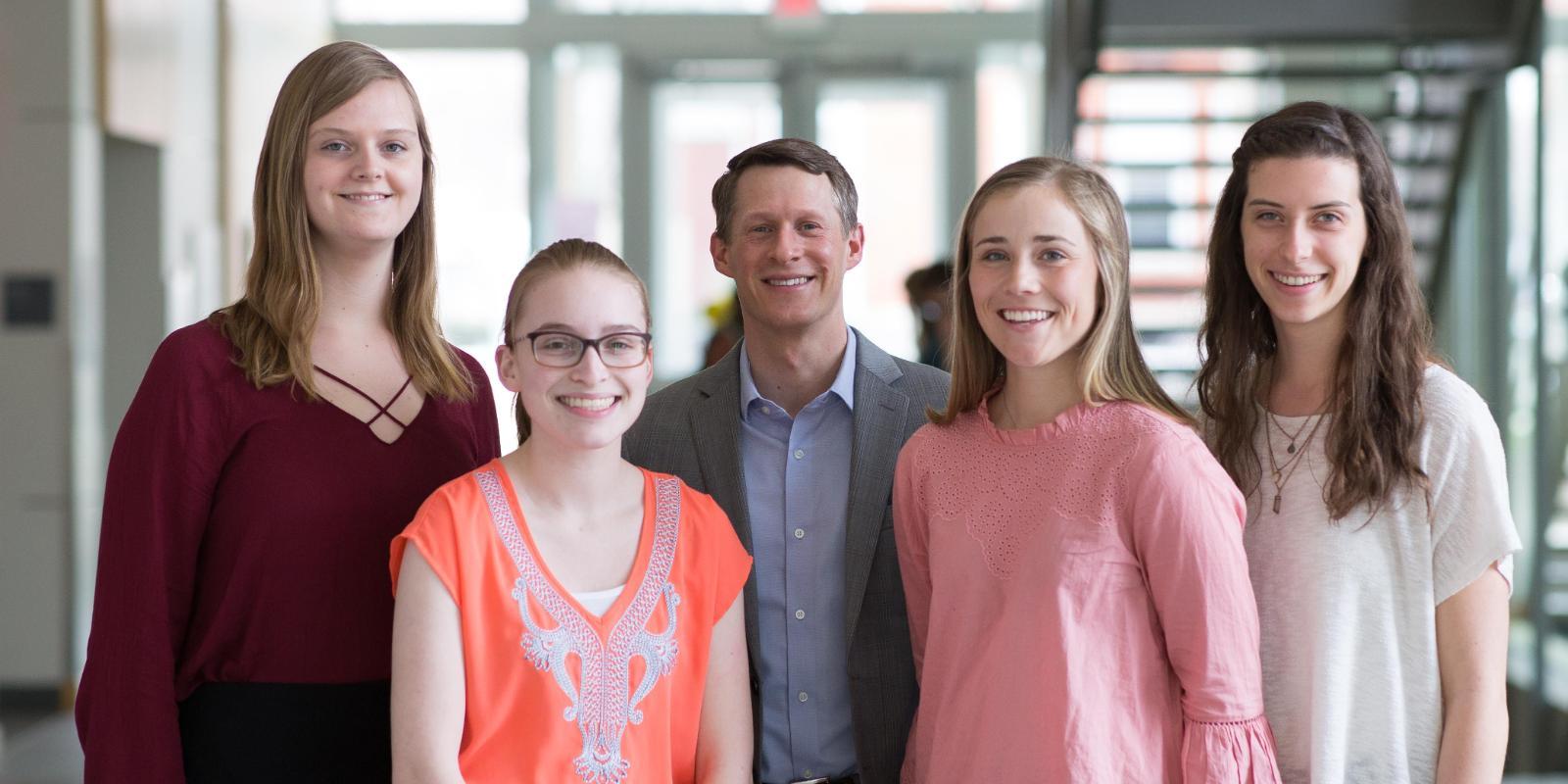 During what he thought was just a personal visit to friends in Kenya, Dr. Scott Ickes discovered the beginning of the next chapter in his professional life.

It was January 2017, and Ickes, who specializes in the social and cultural influences of poor diet and health among mothers and children in low-resource contexts, was taking a break between professional meetings to accompany his mentor, Dr. Jennifer Myhre, as she made her rounds in the pediatric ward at the Naivasha Sub-County District Hospital.

Many of the babies Ickes saw were suffering from diarrhea, and the nurses explained that the likely cause was inadequate breastfeeding among mothers who worked in Naivasha’s flower farms. The flower farming industry there employs more than 70,000 workers, and the majority are women.

As Ickes stood in the ward assessing the situation, he felt a door opening.

“I had recently done a study on the relationship between maternal employment and infant feeding in low- and middle-income countries, so this problem seemed like a perfect fit for where my research interests were going,” he says.

Ickes, now an associate professor in Wheaton’s Department of Applied Health Sciences, has been thinking about the sociocultural factors that impact maternal and child health and nutrition in developing nations for most of his career.

In 2006, while pursuing a doctorate in nutrition intervention and policy with an epidemiology minor from the Gillings School of Global Public Health at the University of North Carolina at Chapel Hill, Ickes taught biology and coached cross-country in Uganda for a year under the auspices of World Harvest Mission (now Serge). The experience introduced Ickes to living in a missional community that was deeply committed with working with local community members to address poverty and injustice. He also met missionary doctors Jennifer and Scott Myhre and gained clarity on his future research trajectory.

“During that year that I saw the far-reaching effects of adequate nutrition in terms of helping children avoid illness and achieve their full potential in school,” he says. “This experience broadened my perspectives about public health issues in the global context and set me on a course to pursue maternal and child nutrition issues in East Africa.”

Ultimately Ickes elected to do his doctoral research on caregiving practices and the use of ready-to-use foods to prevent malnutrition in children in Bundibugyo, Uganda. After earning his Ph.D. in 2010, he completed a National Institutes of Health postdoctoral research fellowship at Cornell University focusing on maternal and child nutrition.

In addition to his time teaching and researching in Uganda, Ickes has collaborated on research projects with scholars in Bangladesh, South Africa, and Malawi. Whether he’s assessing nutritional needs in a particular community or evaluating barriers to effective health interventions, much of Ickes’ work revolves around his concern for the health of working mothers and their children across the globe.

Following the Call to Wheaton College

At the time of his study in Naivasha, Ickes was on faculty at the University of Washington. With colleagues Dr. Judd Walson and Dr. Carey Farquhar, and with the support of Kenyan breastfeeding expert Dr. Ruth Nduati, Ickes pursued funding for further research in Kenya.

The team submitted a grant proposal to the Fogarty International Center, a division of the National Institutes of Health (NIH) that awards an International Research Scientist Development Award (IRSDA) to a select number of early-career researchers each year. The nearly $700,000 grant funds research for five years, and requires that half of a recipient’s time will be spent at institutions based in a low- or middle-income country (LMIC).

As the number of women entering the workforce continues to increase in LMICs, it is becoming more and more critical “to determine optimal methods to ensure that these women are able to continue to breastfeed as they resume work outside of the home,” Walson says.

While waiting to hear about the status of his application, Ickes says, he felt called to teach at Wheaton, an institution he had long respected because of the “intellect, compassion, and deep faith” of several friends and colleagues who were Wheaton graduates.

In the fall of 2017, Scott joined the faculty as an associate professor in the Department of Applied Health Sciences. After his first semester at Wheaton, Ickes learned that he was one of only five early-career researchers nationwide to receive an IRSDA award. He continues to collaborate with team members at the University of Washington, which operates a clinical residency training program in Naivasha, on the project.

For the next five years, Ickes and his family will spend six months out of the year in Kenya working on the NIH-funded research. He will spend the remaining six months teaching at Wheaton each spring semester.

In May, when the research project begins, three Wheaton College students—Hannah Sanders ’20, Kaylah McAnally ’20, and Hannah King ’20—will join Ickes on site. A fourth, Hannah Clark ’20, will remain stateside.

“I’m excited to see what doors open for these students as a result of their participation in this research,” he says.

Over the course of two months in Naivasha, Sanders, McAnally, and King will recruit research participants and collect baseline data from mothers, health care workers, flower farm managers, and day care center workers through surveys and interviews. Clark will serve as a data manager, responsible for transcribing interviews, managing the study database, and analyzing data.

“Factors including gender dynamics, the prevalence of infectious disease, employment rates, and social norms can influence the impact of breastfeeding promotion efforts,” Ickes says. “We hope to identify best practices and to develop a model to understand the factors that influence breastfeeding policy, with the goal of supporting the creation, implementation and scale-up of support for breastfeeding at other farms and places of employment.”

For King, the trip offers a chance to apply knowledge in statistics and research from her sociology major to a context that is in some ways similar what she experienced growing up as a missionary kid in Rwanda and Kenya.

King’s parents, both physicians, restarted a hospital in Rwanda after it was destroyed in the Rwandan genocide. “Their example, as well as the realities of lack of access to health care in East Africa that I saw, showed me how important it is that health care is accessible to all,” she says.

Sanders, an interdisciplinary studies major who currently serves as Ickes’s research assistant on campus, will assist in quantitative data collection by helping to measure the weight and height of newborns. She will accompany Ickes on interviews, take notes, transcribe audio recordings, and analyze the qualitative data the team collects.

McAnally, an applied health science major, studied nutrition with Dr. Ickes. “So many people in the U.S. and around the world are suffering from diseases and deficiencies that can be easily prevented with access to healthier options,” she says. “This summer, I’ll be able to understand more fully what it means to serve in different cultures and to promote culturally relevant disease and malnutrition prevention.”