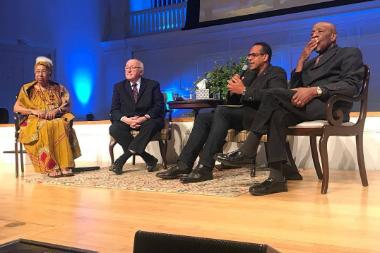 Last week, Wheaton College welcomed three luminaries of evangelicalism to Edman Chapel for a conversation about race and evangelical thought in America.

In a series of three special chapel messages presented through a partnership between Wheaton College and Fuller Theological Seminary, Wheaton College Chaplain Rev. Tim Blackmon dialogued with Drs. John Perkins, Ruth Bentley, and Richard Mouw as they shared about the intersections of race, evangelicalism, and justice in their own lives.

Perkins, Bentley, and Mouw were joined on campus by eight students from Fuller Theological Seminary and additional faculty and staff from the William E. Pannell Center for African American Church Studies at Fuller Theological Seminary. While on campus, the group participated in an intergenerational discussion of African-American pastors and leaders hosted by Wheaton’s Center for Applied Christian Ethics, and met with Wheaton student leaders from the Office of Multicultural Development, Solidarity Cabinet, and Shalom House.

Blackmon framed the chapel series by inviting students to think carefully about the implications of the gospel for inequality, for systemic racism, and for racism as an idolatry and belief system.  He asked students to consider how Wheaton’s identity as an evangelical institution should shape its engagement with issues of racism and inequality.

“The current generation primarily hears the word ‘evangelical’ used in a political sense, and they have relatively little patience for that term,” Blackmon later explained. “But individuals like Dr. Perkins and Dr. Bentley have been so passionately committed to using the term evangelical because they recognize that the resources for transforming our country lie within the gospel.”

During the chapel messages, Perkins and Bentley each shared an oral history of their backgrounds and experiences as black evangelicals. Perkins, who received an honorary doctorate from Wheaton in 1980 and worked as a civil rights activist and founder of Christian Community Development Association, described growing up in a sharecropping family in Mississippi in the 1930s and coming to know Christ against the backdrop of Emmett Till’s brutal murder and Rosa Parks’ arrest.

“I had never believed that it was okay to accept segregation. I never believed that God is a bigot,” Perkins said. “God loves all his children, but in Mississippi, where I came from, the government and Christian people blocked black children from even entering the door.”

Bentley, who graduated with a B.A. from Wheaton in 1955 and an M.A. in 1958, described her experiences as the one of the only black students in predominately white institutions of higher education and religion. Along with her late husband, Rev. William H. Bentley, Bentley was among the the group that founded the National Black Evangelical Association in 1963 and has worked for reconciliation within evangelicalism for more than sixty years.

On the last day of the chapel series, Mouw, President Emeritus of Fuller Theological Seminary, discussed how God developed his empathy and a sensitivity to the wounds of racism in America.

Blackmon says that he hopes students will recognize racial reconciliation as a mandate and a holy calling for Christians as a result of the opportunity to hear from Perkins, Bentley, and Mouw.

“Their stories were absolutely compelling, and within their stories they embedded insights about the economics of racial injustice and the systemic nature of racism. These stories have a way of shaping our social imagination and our ‘kingdom-consciousness.’”

All three chapel messages are available online on Wheaton’s YouTube channel. For more information about chapel at Wheaton and to watch a livestream of chapel services each Monday, Wednesday, and Friday at 10:40 a.m., please visit wheaton.edu/chapel.