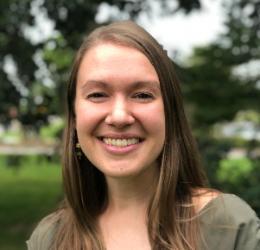 Sarah Johnson is excited to be a first-year GRA in Fischer Hall this year while pursuing a master’s in Higher Education and Student Development. Though she has lived in many places, she considers the beautiful rolling hills of Virginia to be home. She received her bachelor’s in Biblical Languages from Union University in Jackson, Tennessee. She loves spending time outdoors, exploring new cities, reading books, and eating ice cream every chance she gets.

Preston is in his second year as GRA in Fischer Hall while he pursues his master's degree in Higher Education and Student Development. Originally from Rockford, Illinois, he graduated from Wheaton College undergrad with a major in Biblical and Theological Studies. Preston is passionate about equipping students with truth about themselves and about God in such a way that they engage with God, others, and life with integrity. In his free time, you might find him playing spikeball, talking about books and ideas with friends, or watering his house plants.

Jake MacAdam is serving as a first-year Graduate Resident Adviser in Smith-Traber residence hall after having recently graduated from Wheaton this past May. During his undergraduate years at Wheaton, Jake was a Christian Formation and Ministry major, a student body chaplain, a Resident Assistant in Smith-Traber, and gained experience with discipleship and ministry through several internships across the states. His deep passions for discipleship and hospitality have led him to now pursue his master’s degree in Higher Education and Student Development at Wheaton. He hopes to learn skills and gain experience through both his courses and his GRA role that will help prepare him to serve in Christian-college student development departments. His hobbies include cooking, writing and recording original music, brewing specialty coffee roasts, playing soccer, and woodworking.

Connor Knapp is a second-year GRA in Smith-Traber. He was born in Denver, Colorado and raised in Valparaiso, Indiana. He graduated from Indiana Wesleyan with a B.S. in psychology, and is pursuing his master's in Higher Education and Student Development. Connor loves spending time with his friends, drinking coffee, hiking in new places, and going to the beach. He's always excited about meeting new people and getting to hear their stories.

Mark Gossage is a first-year GRA in the McManis-Evans Hall while he pursues his second master’s degree. Originally born in Chicago, IL, but moved when he was two, Mark is now back to his infant stomping grounds to join the Wheaton community for the first time. He graduated from CIU with his undergraduate in Business and Bible to then go work for a gap year program called Impact 360 Institute leading international trips to Brazil, living residentially with students, and mentoring students the past two years. He is excited to join the ResLife family at Wheaton and is passionate about shaping future kingdom leaders. In his free time, he loves to be reading, getting coffee with a friend, hiking outdoors, shooting photography, talking theology, and pursuing personal development.

Peter Dukes is in his first year as a GRA in Upper Class Halls as he pursues his master's.  He was raised primarily in the Lyons Township community, but spent 5 years in Tokyo, Japan with his family from 3rd-7th grade.  He graduated from The University of Iowa and worked in Sales and Marketing until he ended up coaching and serving in Chicago at Chicago Hope Academy the past three years.  In his free time, he likes to play any kind of sports, be outdoors, share coffee, and read.