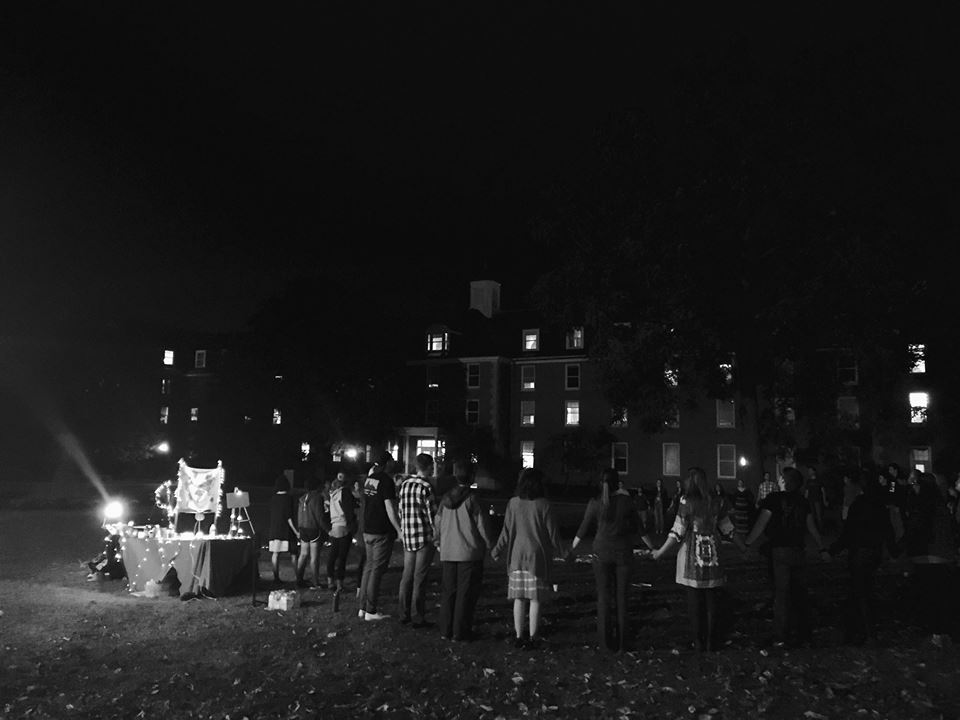 Mission: WCF exists to influence a deeper understanding of God’s global mission of reconciliation through intercession, celebration, and mobilization.

Vision: WCF seeks to tell gospel centered stories to foster a hunger for the presence of God and invite students to participate in the restoration and reconciliation of the family of God.

The Ministry of Reconciliation

Therefore, knowing the fear of the Lord, we persuade others. But what we are is known to God, and I hope it is known also to your conscience. We are not commending ourselves to you again but giving you cause to boast about us, so that you may be able to answer those who boast about outward appearance and not about what is in the heart. For if we are beside ourselves, it is for God; if we are in our right mind, it is for you. For the love of Christ controls us, because we have concluded this: that one has died for all, therefore all have died; 15 and he died for all, that those who live might no longer live for themselves but for him who for their sake died and was raised.

From now on, therefore, we regard no one according to the flesh. Even though we once regarded Christ according to the flesh, we regard him thus no longer. Therefore, if anyone is in Christ, he is a new creation. The old has passed away; behold, the new has come. All this is from God, who through Christ reconciled us to himself and gave us the ministry of reconciliation; that is, in Christ God was reconciling the world to himself, not counting their trespasses against them, and entrusting to us the message of reconciliation. Therefore, we are ambassadors for Christ, God making his appeal through us. We implore you on behalf of Christ, be reconciled to God. For our sake he made him to be sin who knew no sin, so that in him we might become the righteousness of God.

“It was an electrifying moment. Wheaton College was in the midst of special services held twice each year in chapel. It was February 1936. The speaker, Dr. Robert McQuilkin, founder and president of Columbia Bible College, had been taken ill with the flu and was unable to speak. Dr. Walter Wilson of Kansas City filled in for him that day. As the chapel hour drew to a close, song leader Homer Hammontree was about to dismiss the meeting.

Suddenly a senior male student, Don Hillis, stood up and inquired what Christian students who truly love the Lord, should do to receive the fullness of the Holy Spirit's power. He deplored the fear of emotionalism that he saw among many Wheaton students. He said he believed such fear was hindering the work of the Holy Spirit. Students responded to his earnest concern, and the chapel service became a prolonged period of confession of sin and praying to God for forgiveness that lasted until the evening service.

Thus began what came to be known as the Revival of 1936. By the final day of the week Dr. McQuilkin had recovered and brought the closing message. He gave a ringing challenge for missions to which scores of students responded, committing themselves to overseas service.

Wheaton students returned to the campus in the fall of 1936 with a new enthusiasm to follow through on what God had done in their hearts during the revival of the previous February. What had been the SVM (Student Volunteer Movement) chapter at Wheaton now became a charter member of the SFMF (Student Foreign Missions Fellowship). Students held weekly meetings of missions emphasis with outside speakers. Prayer groups based on geography were organized again, so that students concerned for a specific area of the world could pray together. Teams of students from Wheaton fanned out to colleges and Bible institutes in the Chicago area to share their vision for fulfilling the Great Commission.

Since its founding in 1936, FMF has played a significant role on the Wheaton campus. During the post-World War II years it was the largest student organization, with attendance of up to 500 and sometimes even 700 or 800 for special events. Later it suffered from a decline of missions interest, which is chronicled elsewhere in this book. The name went through a series of changes, from FMF to SMF (Student Missions Fellowship, then Student Missions Forum), to WCF (William Carey Fellowship, which became World Christian Fellowship).”

World Christian Fellowship invites students who are passionate about our campus, a particular country, or a people group to meet and pray on a regular basis together.

World Christian Fellowship will be leading students in prayer on campus this year in a variety of ways. Keep an eye on their instagram page @wcf_wheaton for updates.

If you are interested in resources to pray for the nations on your own, One Way Ministries in Naperville offers Prayercast >> for Christians who are passionate about partnering with the global Church in prayer for our world. In their own words, “Prayercast is a viral community who seeks to coordinate and activate world-changing prayer. We are consumed with a fervency to exalt Christ and advance His gospel to the corners of the earth. To this we are fully committed. Ultimately our hope is that souls would be saved as the Body of Christ unites in prayer—and as He hears and intercedes on behalf of those prayers."

To accomplish this vision, Prayercast harnesses the fluidity of the internet with the strategic use of media, music and, of course, prayer. Every two weeks a new Prayercast will be featured, highlighting a specific world prayer need.

We ask that you commit to pray with us. Covenant to pray—consistently, aggressively, faithfully so that the kingdoms of this world may become the Kingdom of our Lord.

How To Use the Prayercast Site

Sign up to Prayercast via email or RSS to receive updates when a new Prayercast has been added. Included with each video is a downloadable prayer guide to use in your personal devotional time or to share with your small group. After meditating on each Prayercast, we encourage you to post your own prayer to the ‘Leave Your Prayer’ section of each post so that we can collectively submit the needs of each nation or topic to God. (Information taken from One Way Ministries Website).

What is Urbana? . Urbana is a major Christian student missions conference sponsored by InterVarsity Christian Fellowship. The event is designed to inform Christian students about global issues and issues around the world that missionaries face. The Urbana conference happens only once every three years!

Last year, Urbana 18 sought to compel this generation to give their whole lives to God’s global mission.

Together with other students listening for God’s call on their lives, over 100 Wheaton student participants were challenged by speakers and enabled to speak with hundreds of missions organizations. Attendees were afforded an amazing selection of seminars. They were also able to participate in unique tracks, worship, and performing arts. Students also received prayer and studied the Bible inductively.

The Urbana 18 conference was held in St. Louis, Missouri December 27-31, 2018. If you are interested in attending, receiving a scholarship, or just finding out more about Urbana in 2021, please email oco@wheaton.edu.