Reflections on Science and Faith 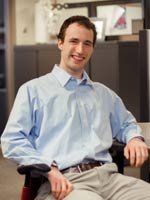 I recently had dinner with a friend and prospective Wheaton student while she was visiting the school. During the course of our conversation, she became adamant that there are no benefits to learning from a Christian perspective. Though disagreeing with her assertions, I encouraged her to study science at Wheaton because of the tremendous impact Wheaton professors have had in deepening my love for science and understanding of how science and faith relate. Further, their example of how to perform science as a Christian will be invaluable as I engage in philosophical discussions with future colleagues and attempt to engage in every activity as worship to God.

The professors are what makes attending Wheaton so worthwhile. Their commitment to aiding the growth of their student’s passions for academics and God is truly astounding. Personally, I would not be a scientist had not one professor in particular reached out to me. As an underclassman, I disliked scientific research and was studying biology merely so that I could get into medical school. I struggled in the lab in part because habits caused by my obsessive compulsive disorder made performing research unbearable. Overwhelmed by and uninterested in biological research, I decided to drop my biology major. Word of my decision spread and this professor sought me out to talk to me about my decision. Due to past experiences of teachers openly mocking my condition, I was ashamed of my struggle with OCD and kept it a secret. The love I had witnessed in my Wheaton professors, however, made me feel comfortable opening up to this professor. I felt surprisingly reassured by her response. She told me that she had seen her brother struggle with OCD and would willingly help me become comfortable with doing research. This professor’s encouragement gave me confidence, and I have since fallen in love with scientific research. Research allows the scientist to experientially learn the intricacies of a specific phenomenon and have a sense of purpose that they are contributing previously undisclosed knowledge. These both lead to greater appreciation of the natural world and how God is glorified through it. I owe my enriched appreciation of science to this professor for gently encouraging me to give research a second chance.

Just as learning is best done experientially and not through merely memorizing ideas, my scientific worldview has been impacted most by actively engaging with science alongside my Christian professors. By hearing them recount their experiences in secular labs, I know what ethical issues to expect upon graduation and how to best witness to my colleagues. I have also learned that as a Christian, the goal of research is not to somehow prove that God exists. Rather, my motivation is to work my hardest and glorify Him in the process. Most importantly, my professors have repeatedly emphasized to view research as worship. God’s majesty and power are clearly demonstrated in everything in science from the vastness of the universe to the complexity of cells. Because of this, every scientific observation provides an opportunity to be in awe and glorify our Maker.

There is a popular misconception that science and religion are in conflict. More specifically, many atheists and Christians argue that either evolution or the Bible invalidate the other. This idea is something that I struggled with for a long time. In high school, I was confident that evolution had to be wrong in light of what Scripture taught. I probably would still be in denial of the scientific evidence for evolution if I attended a secular school. The trust and respect I had for my professors, however, compelled me to rethink my position on this supposed controversy. If God is a rational God who does not lie (Numbers 23:19), He would neither create the world in a way that is contrary to His Word nor in a way that is inconsistent with science. Therefore, scripture and science must both be true. The details of how this plays out is complex and beyond the scope of this essay. Nevertheless, the transparency of my Wheaton professors has given me the confidence to wrestle and pray through these issues and come up with answers which are both theologically and scientifically sound. I am also better able to think through these questions critically and appropriately because of my liberal arts training. For example, Bible courses have informed me that the ancient Jews did not interpret Genesis 1 to be an explanation of how God created the earth, but rather how He gave creation function. This supports the argument that scripture is not in direct opposition to science. More importantly, my liberal arts education has taught me to approach complex issues from the Fides Quaerens Intellectum (faith seeking understanding) perspective. By starting my search for truth with the assumption that God exists, it becomes evident that all other truths glorify, support the existence of, and provide a better understanding of God. I should not become frustrated when the relationship between faith and science does not immediately make sense because the purpose of the integration of theology and other disciplines is not to prove God, but rather to better understand Him. This compels me to humbly trust God as I think through these issues. Hopefully, the opportunity I’ve had to think critically about these issues will prepare me to more effectively witness to future colleagues.

Before coming to Wheaton, I, like my friend, did not believe that there was any significant benefit from learning material from a Christian perspective. It has since become abundantly clear that a Christian liberal arts education portrays academia in its purest form because it demonstrates how God is glorified in the subject being studied. The small class sizes and shared Christian convictions allow for professors to mentor students and challenge them in their understanding of doing science as a Christian. I am forever indebted to my Wheaton professors for shaping my worldview and demonstrating how to perform science as a Christian.