My Education on the Stage: Reflections of a Graduating Wheaton Student 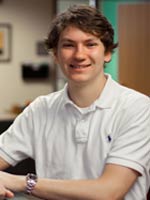 When I arrived at Wheaton College as a freshman in the fall of 2009, the words “liberal arts” meant little to me. I had heard someone explain that a well-rounded education, one that covers many topics, is best at preparing one for the unexpected, and that had seemed sensible enough. But when I encountered a Philosophy professor for whom the liberal arts meant much more—something profound, but which I did not quite understand—I began to glimpse that something was at stake beyond a versatile skill set and a decent chance in a changing world. However, what followed that initial glimpse was not a consistent progression toward clarity. Rather, I found myself suspended on many occasions between contradictory visions of what teachers and students ought to be aiming toward, of what it means to be a liberally educated person. As a senior, I have begun to see that this state of being pinned down, sometimes exasperated, sometimes even angered by this tension is not a barrier to, but actually a vital element of, a truly liberal college education.

In the third book of Saint Augustine’s Confessions, he is perplexed by the question, “Why is it that men enjoy feeling sad at the sight of tragedy and suffering on the stage?” (Augustine 55-6). He is recalling the days when he used to inexplicably love the feelings of pity and sadness evoked at the theatre. He concludes that these feelings are sinful for several reasons. First, the audience is not called on to help alleviate the pain of the sufferers with whom they allegedly sympathize, and second, they actually complain if their pity is not stirred up: they enjoy sadness, a sentiment not good in itself, for its own sake. The craving for this experience is what Augustine will call curiositas. “Curiosity” is a counterfeit of the true virtue of studiousness. Because it is ultimately driven by a desire to know God, studiousness refuses to participate in such voyeurism, for it refuses to know without loving.

Many agree that Augustine is a bit too hard on the theater. Nevertheless, he notices a very real problem, and there is wisdom here to be gleaned for the liberal student. What Augustine finds sinful is a certain kind of looking that seeks the mere titillation of the eyes rather than the full movement of the soul toward God. People who take the posture of curiositas crave experiences, including the experience of accumulating academic knowledge, for their own sake, rather than being willing to involve themselves in what is before them, relating it and themselves to the ultimate end of glorifying God through the study of his world. Augustine later depicts curiositas with the vivid image of crowds flocking to see a dead body in the street for no other reason than that it is there to see.

The tension in which I found myself at Wheaton had the effect of denying me the safety of curiositas. It pulled me into a conversation in which I held stake. When I arrived here, I was intent upon learning, but I could never have anticipated that I would become involved with professors who would expect—indeed, when the appropriate relationship had developed, demand—that I hazard an entrance into what had not yet been conclusively defined.

It is no secret that Wheaton is a bustling crossroads of the evangelical world. There is work to be done in the area of ecumenism, and yet our faculty is more like a representative sample (with certain qualifications) of the broader evangelical community than a unified task force. This affords our faculty the opportunity to find curricular unity on a level once removed from that of a more monolithic program, namely, the curriculum is unified around the common goal of presenting students with an open question: “How can we be liberated by education?” This question is also a demand that students be active in their educations. The passive Wheaton student finds it nearly impossible to remain so, for the simplicity of a packaged process is withheld.

If it were otherwise, students might feel a stronger temptation—this temptation is never absent—to be mere observers, who sit in the audience and love to be pulled this way and that by interesting words and books in which they have no stake. “The diverse views of our professors are so interesting.” One might hear this in a carefully edited video, but an engaged student cannot sustain such a posture for long. If he has not entirely isolated himself, curiosity will soon be displaced by responsibility.

I am a Philosophy and English major, and have been encouraged, in different ways and by different professors, to consider deeply what it means to interpret the world Christianly. No text has taught me more about faithful interpretation than Augustine’s Confessions. Like him I have been shaken up by my education. But unlike his, mine has also been the means by which I encountered the demands of studiousness and learned that it can be gained in a place of honest tension. I am very grateful to Wheaton for this.

The best way to sum up my four years at Wheaton is to join Saint Augustine in a confession of what I was before:

I did not seek the kind of sorrow which would wound me deeply, for I had no wish to endure the sufferings which I saw on the stage; but I enjoyed fables and fictions, which could only graze the skin. (Augustine 57)

But as I graduate I find that I can continue with him and—somewhat paradoxically—praise my alma mater: “But where the fingers scratch, the skin becomes inflamed. It swells and festers with hideous pus. And the same happened to me” (Augustine 57). Unlike Augustine, who was mauled by empty sophism, I was agitated with healing scratches.

As I graduate from Wheaton, one central fact will go with me. There is no final curtain. The lights will not flicker on, and the cast will not emerge to thank us for watching. When I would have left the theater, Wheaton taught me to mount the stage.

Seeking Truth and Beauty in the The Liberal Arts