The Buswell Library Archives & Special Collections has received over 80 boxes of Sider’s personal materials spanning 1958–2022, including correspondence, manuscripts, and research materials that document his activism, teaching, writing, and work with Christian organizations. 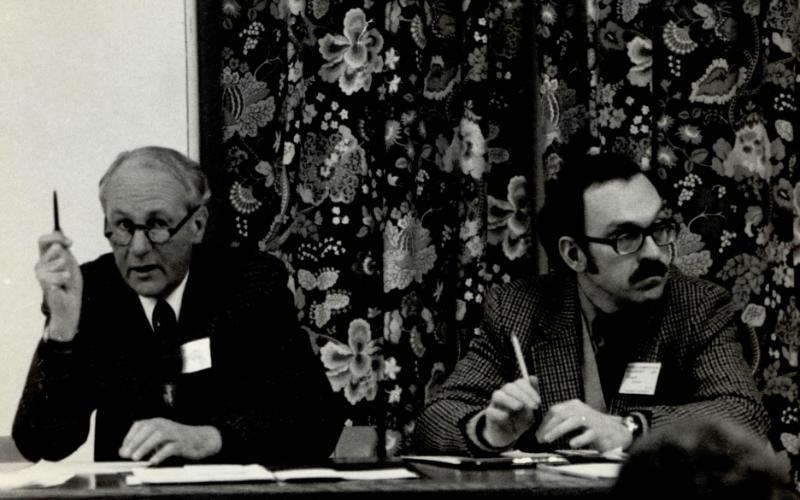 Ronald J. Sider stood at the forefront of applying Protestant Christian theologies to broader society, especially as social justice movements began rising in prominence throughout the mid-1900s. In an era when evangelical Christians were increasingly aligning themselves with the political right, Sider was a prolific author, speaker, and intellectual who firmly believed Christians ought to actively reject the social ills and injustices in the political landscape.

In 1974, Sider and a larger group of evangelical leaders founded Evangelicals for Social Action (now Christians for Social Action). Together, they wrote and signed “The Chicago Declaration of Evangelical Social Concern,” a document that outlined a rejection of “racism, militarism, economic inequality, and sexism.” Three years later, Sider published Rich Christians in an Age of Hunger, a study urging affluent Christians to heed the biblical call to care for the poor and hungry. The book went on to sell over 400,000 copies, with an expanded edition published in 2015, and has been translated into nine languages. Christianity Today named it one of the most influential books in religion of the 20th century.

Although the new Sider collection will not be fully processed immediately, the materials are open for research and have been retained in the original order Sider provided. The collection may be of particular interest to scholars of American Protestant Christianity and the evangelical left in the late 20th and early 21st centuries.

“The Sider papers will join our Special Collections which focuses on collecting, preserving, and making accessible a variety of materials by and about Christians who are exemplary in their fields, particularly those who fall within the broad spectrum of American evangelicalism,” said Katherine Graber, Assistant Professor of Library Science and Group Leader for Archives & Special Collections. “In addition to drawing researchers and scholars from around the world, the Sider materials will be available for Wheaton College students and faculty, and support the College curriculum with primary sources, just like the others in our collections like those of Madeleine L’Engle, Jacques Ellul, and Oswald Chambers.”

In 2012, Archives staff reached out to Ron Sider to discuss the possibility of donating his personal papers to Wheaton College to complement the Christians for Social Action records. Sider agreed, on the condition that he complete his autobiography first. But in July 2022, Sider died before the book was finished. This past fall, Sider’s family generously agreed to donate the collection and began moving Sider’s papers from Pennsylvania to Illinois. In December 2022, the donor signed the deed of gift, officially transferring ownership of all 80 boxes to Wheaton College. The collection is housed in Buswell Library Archives & Special Collections, located in Billy Graham Hall on the southside of Wheaton’s campus.