Shyanne Bennett ’16 is awarded a Fulbright Scholarship. Starting in January, she will spend 10 months writing and volunteering in Panama City, Panama. 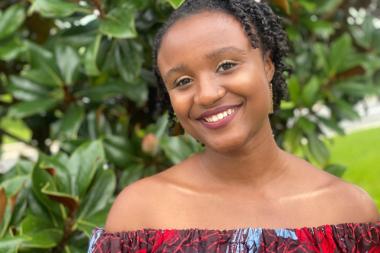 When Shyanne Bennett was little, her grandmother would tell her stories about growing up in Colon, Panama.

“I loved these stories and turned them into poems,” Bennett said. “Then I began to research the historical and cultural context around her stories and what I found spiraled into more poems.”

Panama became the inspiration for Bennett’s documentary poetry, which she pursued as an Interdisciplinary Studies major with a focus on English Writing and Urban Studies at Wheaton College, later as an MFA student at the Columbia University and now as Fulbright recipient. With the Fulbright Scholarship, Bennett will spend the 10 months between January and November 2022 writing and volunteering in Panama City, Panama.

As a documentary poet, Bennett draws on archives, oral histories, and other historical materials to inform her poetry. During her Fulbright, she plans to finish her documentary poetry manuscript, which is about the history of Black West Indian Panama Canal workers, also known as “silver men.” Bennett’s great grandfather was a silver man.

“I want to investigate the lives of these silver men, and account for the lives of women, who immigrated, too, to work in the booming economy of the early 20th century Canal Zone,” she said. “I’m also interested in how the plight of Black West Indian Panama Canal construction workers relates to their Afroantillano descendants in Panama today.”

“Shyanne’s writing honors the Afroantillano Panama Canal laborers, and in so doing reveals the beauty of immigrant lives in the early twentieth century,” said Wheaton College Dean of Humanities Dr. Jeffry Davis.  “Her poetry elegantly portrays a people with nobility and skill, who accomplished much at a great personal cost.”

The Fulbright Program’s mission is “to increase mutual understanding and support friendly and peaceful relations between the people of the United States and the people of other countries.” Started in 1946, the United States Department of State initiative offers research, study and teaching opportunities to students and scholars in more than 155 countries worldwide.

During the 10-month sabbatical, Bennett will work to finish her manuscript while also volunteering with the Sociedad de Amigos del Museo Afroantillano de Panamá (SAMAAP).

“It's an absolute dream to have the opportunity to be there for 10 months,” Bennett said. “As a writer, having my work supported in this way is tremendous.”

“Shyanne proved herself to be one of the most innovative Interdisciplinary Studies majors that I have worked with, and for her final IDS project she designed a creative writing curriculum for under-resourced students in an urban context, particularly promoting poetry writing,” Davis said. “Her Fulbright is a natural extension of work that reflects her commitment to Panamanian history as a documentary poet, exploring narratives of identity, and her own roots in the culture.”