Wheaton College Associate Professor of Theology and History of Christianity Dr. Jennifer Powell McNutt was featured in the documentary, “A Call for Freedom,” which this past week won three Chicago/Midwest Emmys, including Best Historical Documentary. 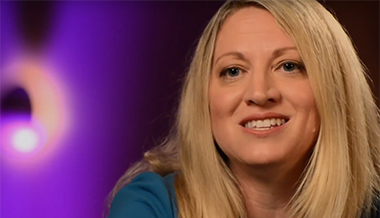 Even after more than 500 years, Martin Luther’s “95 Theses” are still nailing it.

“I am passionate about sharing the story of Christianity to a broader audience so this was the perfect opportunity to help others think through the significance of Martin Luther and the 500th anniversary of the Reformation in an engaging and dynamic way,” McNutt said.

TLN was thrilled with the film’s showing at the awards’ show, held Sat., Nov. 10 in downtown Chicago. The Chicago Midwest Chapter of the National Academy of Television Arts & Sciences (NATAS) hosted the awards gala to recognize excellence in the television broadcasting industry, and “A Call for Freedom” took home Emmys for Best Historical Documentary, Best Lighting and Best Editing.

“Last summer, a small group of us set off on a massively challenging adventure to turn a daunting topic, the Protestant Reformation, into an engaging and fast-moving special about how it has impacted our modern culture,” said the film’s producer and director Joel Mains, in a press release. “We’re gratified that the Chicago/Midwest Chapter of NATAS has recognized this important project.”

Echoing Mains, McNutt added: “The goal of the project was to bring the story of Luther and the Reformation alive for the average person as a way to invite reflection on Jesus Christ, and the documentary certainly achieved that goal. The Emmy awards are a wonderful confirmation of what was accomplished, and I am honored to have had a role in contributing. I hope it can encourage fruitful discussion about the Reformation and more importantly about the importance of keeping Christ front and center in our churches and in our lives.”