Last Sunday, Wheaton College’s missionary kids and third-culture kids gathered together for the 8th annual “American Thanksgiving,” a time of worship and prayer, served alongside turkey and pie, with 30 guests from around the world. 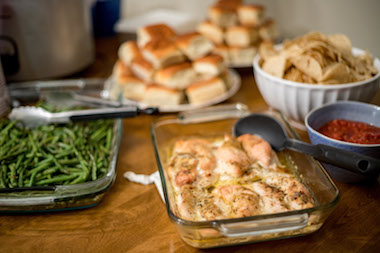 Some missionary kids (MKs) and third-culture kids (TCKs) might’ve celebrated Thanksgiving growing up in countries ranging from Pakistan to Peru. But for others, the holiday is entirely new.

That’s why, in 2011, Mara and Josh Okerman ’07—who both had experiences living in different countries, namely Japan and Zimbabwe—started an “American Thanksgiving.” This event, held the weekend before Thanksgiving Thursday, is aimed at introducing the tradition to Wheaton College MKs and TCKs who might be unfamiliar with it. But it’s also geared toward connecting with these students—either the children of missionaries or those who spent a significant portion of their childhood outside of their passport country—since they might not be able to travel home to their families over the college’s Thanksgiving break.

Last Sunday, November 18 marked the 8th annual “American Thanksgiving” dinner, which was a joint effort of TCK Connect, an organization the Okermans founded to connect TCKs with support and resources, and Mu Kappa, Wheaton’s student-led organization for MKs and TCKs.

“Our Thanksgiving dinner is a good time to remember to give thanks to God,” said Alicia Mundhenk, the 2018-2019 president of Mu Kappa. “It’s a good time to come together and fellowship over food and to celebrate a small aspect of the country that we’re currently living in.”

Paul Condrell, who has taught Chinese at the College, and his wife Stacy have hosted the event for years, and this year welcomed 30 students for turkey, cranberry sauce, mashed potatoes and homemade pies. The Wheaton Women’s Club, an organization that has served the college for more than 80 years, cooked and donated 90 percent of the food for this year’s dinner.

For Mundhenk and other students who identify as MKs and TCKs, the dinner was an opportunity to share an American tradition with those who can relate to their own unique experiences.

“Mu Kappa provides a place for a lot of us to come together who understand aspects of one another that we would have to fully explain to other people,” she explained. “In our community, we can just tell a story and know that a lot of background is already assumed that wouldn’t be assumed in other contexts.”

In addition to sharing a turkey dinner, TCK Connect and Mu Kappa also led the group in a time of worship and thanksgiving to God through prayer. “Students had a time of reflection on ‘Tough-turkey’ situations,” Mara Okerman said. “This time provided guests with a place to reflect on times in their life that were difficult but that they can still thank God for.”

"American Thanksgiving" by the Numbers

30: The number of students that gathered for this year’s celebration

13: The number of turkeys that have sacrificed their lives for the dinner over the past 5 years

5: The number of tables students gathered around to share the Thanksgiving meal

40: The pounds of potatoes that were mashed

280: The number of students who have enjoyed the dinner since 2014

90: The percent of the dinner’s dishes that were provided by women from the Wheaton Women’s Club

80: The number of students at the biggest dinner to-date