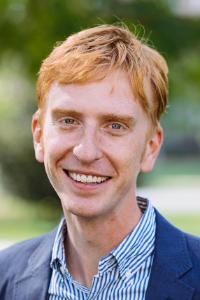 Ian Roseen graduated with a degree in English literature in 2013 from Valparaiso University. While there, he also chose to start at the 101-level of French, a language he had not studied previously, and enjoyed it so much that he continued on several semesters after the requirement had been met.* A strong proponent of interdisciplinary learning, Ian has previously worked in local history museums in NW Indiana, where he led oral history projects and exhibit developments; and at the University of the Arts in Philadelphia, where he assisted the director of the interdisciplinary Common Curriculum program.

Now, Ian is proud to serve as the Senior Office Coordinator of Modern & Classical Languages at Wheaton College, in a division (Humanities) that feels like home, and for a department that serves as a cross-section for interdisciplinary discovery—a place where literature, art, music, history, and cultural studies come together to enhance language learning.

*It didn’t hurt that Ian’s future spouse, Lindsey, was a major in the French program, tutoring him in all the things he didn’t know. You can find them both reading widely and often, going on runs around their neighborhood, traveling to Michigan and elsewhere, and worshipping at Cornerstone Anglican Church in Oak Park, IL.