The U.S. Postal Service delivered the letter to Billy Graham. 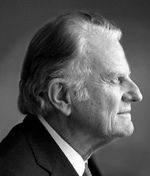 "The family of Wheaton College alumni includes many famous names, but none more so than Billy Graham. His lifetime of preaching the Gospel took him to every corner of the world," says Wheaton College President Dr. Philip Ryken '88. "Yet despite his global influence, he never lost his humble dependence on God or simple love for Jesus Christ. We here at Wheaton will dearly miss the loving support, generous encouragement, and Christ-centered dedication he modeled for all of us."

Billy Frank, as he was called as a child, grew up in Charlotte, North Carolina, expecting to follow the lifestyle of his father and grandfathers. Frank and Morrow Graham owned a 300-acre dairy farm, and early on, their children were initiated into the routine of farm life.

The world lost a farmer and gained an evangelist in 1934, when the well-known sin-scorning preacher Mordecai Ham arrived in Charlotte for an 11-week campaign. At first, Billy refused to attend. When he did accept a friend’s invitation, Billy felt singled out by the evangelist’s description of sins.

During those weeks, Billy came to see he did not know Jesus. One night, around his 16th birthday, he responded to Ham’s invitation to accept Christ. “Lord, I don’t know what happened to me tonight,” Billy later prayed in his bedroom. “You know. And I thank You for the privilege I’ve had tonight.”

Billy began digging into Scripture. He looked forward to church, and the times when he could talk to God in prayer. And he began to sense a call to ministry. In his high school yearbook, Billy completed the questionnaire statement “My hopes and plans for the future…” by writing is “to serve God and do His will as a minister of the Gospel.”

After a semester at Bob Jones College, Billy transferred to Florida Bible Institute, where he could not get away from a nagging feeling, as he referred to it, that he was being called to preach. Dozens of people accepted Christ as a result of his sermons, but he was not convinced. Finally, one night he cried out, “O God, if you want me to serve you, I will.”

“Billy then realized more than ever that he had a purpose, a call,” his mother, Morrow, said years later. “His letters, which had always been serious, now began to show even more clearly that he had but one passion: to preach the gospel.”

Upon graduating from the Florida Bible College (now Trinity College of Florida), two men, Paul Fischer and Elner Edman, urged him to consider Wheaton College. Billy had some concerns, particularly about his high-school grades. But he also had solid references: Paul’s brother, Herman, was chairman of Wheaton’s Board of Trustees, and Elner’s brother, Raymond, was interim president of the College. Billy was accepted.

The Grahams at Wheaton

Billy arrived at Wheaton in September 1940 as a six-foot-two-inch, 160 pound, 21-year-old ordained Southern Baptist minister—and a second-semester freshman. (Most of his Florida Bible Institute credits were not accepted.) His clothes were outdated and he talked fast with a heavy accent. “I felt like a hick,” he wrote in his autobiography Just As I Am.

During one of his first days on campus, Billy was greeted by a stranger. “Hi, Bill!” the man said. “How’s everything in North Carolina?” Billy discovered the next day that the mysterious man was V. Raymond Edman, the College president. That encounter led to a friendship that lasted until Edman’s death in 1967. “From the day I walked on this campus, his advice and counsel have been a part of my ministry,” Billy said at Edman’s memorial service. “I never made a major decision without consulting him.”

That consultation started while Billy was still in school. In addition to studying anthropology, he was invited to serve as pastor of the United Gospel Tabernacle, a congregation of 300 in Wheaton. He also got involved on campus, serving as president of the Christian Council his senior year.

Despite his busy schedule, Billy still found time for Ruth Bell. Ruth, the daughter of missionaries, was born in China and spent her first 17 years in Asia. She followed her sister Rosa to Wheaton, with the intention of becoming a field missionary.

It took Billy a month to find the courage to ask Ruth out on a date. After that first date, Ruth got on her knees and told the Lord if she could spend the rest of her life serving Him with Billy, she would consider it the greatest privilege.

Billy didn’t know this, and on more than one occasion he thought he didn’t stand a chance with her. He saw in her culture, poise, and intelligence superior to his own. But that didn’t stop him from asking for her hand in marriage. On July 6, 1941, after months of prayer, Ruth sent Billy a letter accepting his proposal.

Ruth and Billy were married in North Carolina on August 13, 1943, two months after graduating from Wheaton. Billy once wrote: “I have been asked the question, ‘Who do you go to for spiritual guidance?’ My answer: My wife, Ruth. She is the only one I completely confide in. She is a great student of the Bible. Her life is ruled by the Bible more than any person I’ve ever known. That’s her rule book, her compass. When it comes to spiritual things, my wife has had the greatest influence on my ministry.”

Ruth soon realized hers would be a life of goodbyes. After graduation, Billy assumed the pastorate of The Village Church of Western Springs (now Western Springs Baptist Church) in a Chicago suburb. But he also maintained the schedule of an itinerant evangelist, preaching throughout the Midwest.

A turning point in Billy’s ministry came that winter, when radio host Torrey Johnson ’30 asked Billy to take over the show, “Songs in the Night.” For his first show, Billy convinced WMBI announcer George Beverly Shea to sing—marking the beginning of a decades-long relationship.

Billy’s association with Torrey also grew. Torrey was forming Chicagoland Youth for Christ, and invited Billy to speak to more than 2,000 young people in Chicago’s Orchestra Hall—Billy’s largest live event at that time. Forty people received Christ that night. Billy called it “one of the most humbling and spiritually encouraging moments of my life up to that time.”

When Torrey launched Youth for Christ International (YFC) in 1945, Billy resigned his pastorate and became YFC’s first full-time employee. He traveled the United States and Europe, developing a reputation as a dynamic speaker whom the Holy Spirit used to draw people to Christ.

In 1948, he became the youngest college president in the country, at the Northwestern Schools in Minneapolis. During his time there, while continuing to preach for YFC, enrollment at the school increased, a new building was completed, and finances improved. But Billy also realized he was called to be an evangelist, not an educator. He resigned in 1952.

In those first years of full-time ministry, Billy realized more clearly what God was calling him—and not calling him—to do. His personal mission statement reflected this understanding: “My one purpose in life is to help people find a relationship with God, which, I believe, comes through knowing Jesus Christ.”

Billy Graham became a headline in late 1949. Despite great momentum, Billy’s preaching at the evangelistic campaign Christ for Greater Los Angeles had not drawn media attention. Then one night, the tent at Washington Boulevard and Hill Street teemed with reporters and photographers. When Billy asked why, a journalist told him, “You’ve just been kissed by William Randolph Hearst.”

Hearst owned two newspapers in Los Angeles and several more across the country, and had turned his editors’ attention to the campaign. Soon, Hearst’s competitors also covered the story. Billy never met Hearst, but said later, “I am convinced God has used the press and TV coverage in our work, and it has been one of the most effective factors in sustaining public interest through the years.”

Boston was up next, followed by South Carolina and New England. Thousands more made commitments to Christ. Billy and Ruth now understood Los Angeles was just the beginning, not the climax.

In 1950, Billy launched a radio program, “The Hour of Decision,” and formed the Billy Graham Evangelistic Association. The core team Billy recruited at the time would stay with him for 40-plus years: Cliff Barrows, George Beverly Shea, Tedd Smith, and Grady Wilson '43. The core values from those early crusades still guide the Billy Graham Evangelistic Association: absolute financial and moral integrity; systematic follow-up of new believers; and cooperation with as many churches in a city as possible.

When Billy and the team arrived in London in 1954 to taunts of “Who invited you, anyway?,” he had a ready reply: more than 100 area church leaders. Many predicted the crusade’s failure. A bishop said, “Billy Graham will return to the United States with his tail between his legs.”

Others in Great Britain, though, had been praying for months for the crusade, a pattern that would continue for the length of Billy’s ministry. God answered many prayers in England, allowing Billy to preach for three months to more than 2 million people—52,000 received Christ.

Three years later, Billy’s team prepared for its biggest challenge yet: New York City. Two months into the crusade, Billy preached to 100,000 people in Yankee Stadium. The crusade was extended eight weeks, and more than 2.5 million people listened to the gospel in venues such as Madison Square Garden and Times Square. More than 60,000 accepted Christ at the meetings, and another 30,000 professed by mail the decisions they made while watching live telecasts.

“Thrill seekers expecting hysteria would be better off at a rock and roll concert,” syndicated columnist Dorthy Killgallen wrote. “Graham does not court hysteria. Neither does he hypnotize individuals or masses. To Billy Graham, heaven is just as real as Chicago.”

Billy preached the Good News to some 215 million people in live audiences in 185 countries and territories at more than 400 crusades, missions and evangelistic rallies. Millions more heard him on the radio and watched him on television and film. He founded two magazines, Christianity Today and Decision. His syndicated newspaper column, “My Answer” reached 5 million readers. He authored 33 books.

Billy’s image appeared on the covers of Time, Newsweek, People, The Saturday Evening Post, and countless others. Merv Griffin, Dan Rather, Johnny Carson, and Larry King interviewed him. Buildings, schools, and highways bear his name.

He met nearly every world leader since 1950, from Truman to Trump, Churchill to Thatcher, Meir to Gorbachev. He golfed with Arnold Palmer and Bob Hope. He received the Presidential Medal of Freedom, the Congressional Gold Medal, and a star on the Hollywood Walk of Fame—something he accepted in hopes it would lead even more to find Christ.

In times of celebration and tragedy, Billy’s country called on him for a word from God. He delivered the invocation at presidential inaugurations, and he preached at the National Cathedral in Washington, D.C., three days after the terrorist attacks of September 11, 2001.

But Billy never thought of himself as special, as more than a preacher from a farm in North Carolina. “One of the secrets to Dr. Graham’s ministry is that he managed to maintain over the decades an extraordinary balance and focus, demonstrating to the end the same humility, integrity and genuineness that rendered him so useful to God in the first place,” says Wheaton College President Dr. Philip Ryken.

In Just As I Am, Billy wrote: “I have often said that the first thing I am going to do when I get to heaven is to ask, ‘Why me, Lord? Why did You choose a farm boy from North Carolina to preach to so many?’”

“I have thought about that question a great deal, but I know also that only God knows the answer.”

Wheaton has issued a press release in regard to the passing of Billy Graham.