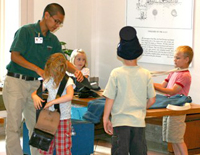 Dan was a programs intern at the First Division Museum, an opportunity he learned about from fliers posted in the history department. Other internships available at Cantigny >> include archives intern and curating intern. He worked in the education department at the museum, and his big project was running a weekly program for children and adults called "History Alive!" This interactive program teaches people about every war that the First Division of the Army has been a part of, while letting them handle artifacts from the wars such as uniforms and equipment. He could have up to 200 kids in 3 hours by himself--"that's pretty intense," he says. Another of his assignments was to look through the materials and lessons used in the weekly program and improve them, making them more age appropriate.

He did historical research as well, making an inventory list of what each different person who had served in the First Division would have worn or carried, in each of the different wars. He had to determine every specific, down to the number of magazines of ammunition a soldier would carry, which he learned through primary research in archives and by talking to veterans themselves.

He called his internship an "eye-opening experience" and said he especially enjoyed being able to handle the artifacts themselves, because it adds a human dimension to war history, understanding what people had to live through, making them more than just a page in a history book. He said the experience made him more curious about the human story behind history.

Although Dan originally thought he wanted to teach history, he said his experience taught him he doesn't have the stamina to teach preschool or early elementary kids, after refereeing fights over gas masks. He thinks he will pursue teaching middle school or high school, where he can help them think beyond "good guys" versus "bad guys."

"History is reflective of what we think of ourselves," he says, and after this experience he wants to help others think through it.