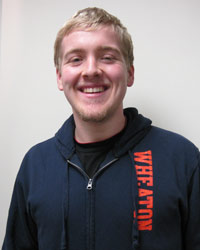 During the summer of 2011, Nick Turner (Class of 2011) did an internship at the Panhandle-Plains Historical Museum. He was the intern to the special projects coordinator. During the bulk of his time at the museum, the museum was installing and renovating its Prairie Town exhibit. “By merit of it being the Panhandle-Plains Historical Museum they wanted to have a town which when you walk into it is supposed to be an old time West Texas town. The exhibit was somewhat outdated and there were areas partitioned off, so the museum was trying to make it more accessible and more accurate.” Part of Nick’s job was to do research on what kind of artifacts would be in the various stores. While doing renovation they found items in the saloon from 1960. Nick was charged with acquiring accurate items for display. For example, Nick would figure out what kind of beans they would have in 1890 West Texas and find it or find the label online to make it.

Nick also did other spot research as needed. One of his more interesting assignments involved a rather old artifact they stumbled upon during the renovation, “They found this awesome artifact, a can of Budweiser that they didn’t know exactly when it was from, just that it was really old. It was still sealed up, still had the beer in it. So they told me to figure out how old it was. I pulled out a magnifying glass looking at the label, and went online comparing, and found out it was from 1886. It was a really old thing. Stuff like that was more what I had to do, identifying when things were from. The plan for the can was to put that in the exhibit, along with a label saying, can you figure out how old this is?” Ironically, the can was older than the settled area. As Nick learned in his internship, the Panhandle area of West Texas is relatively young. Amarillo, the biggest city in the vicinity, wasn’t settled until 1890 and it was considered part of “the last frontier.” There were small pockets of people around before that, but not many survived.

Nick’s internship was every Tuesday, Wednesday, and Thursday morning, and he’d usually start his day meeting with his boss (or with the education coordinator) to figure out what to do that day. When asked what advice he’d give to history majors looking to do an internship, Nick said he would recommend you figure out your responsibilities before you begin or right at the very beginning. “I was one of their first interns, and I was busy the whole time, but there were times when I was doing stuff that anybody could do. One of the more random things I did was gather grass for the Prairie Town exhibit. They went and found a local botanist who could identify the native grasses and can tell what would have been around 100 years ago. So I went out with a machete and got bags and bags of tall grass so the museum physical plant could put it in the ground and make it look like it is real grass.”

Other activities Nick participated in in his role as intern included a night at the museum. Nick was in charge of the Texas Longhorn exhibit, where he talked to people about the longhorn. “It was really fun, they turned off all the lights except for normal security lights and everyone who came had flashlights and would wander around the museum. The second night they did it I was basically security. There’s a paleontology wing with the dinosaurs and so I had to make sure the kids wouldn’t climb them. That was a lot of fun, but the adults were so much worse than the kids. The little kids aren’t going to go over the barrier, it’s as tall as they are and in the dark, they wouldn’t try it, but most of the adults think, ‘it’s dark, no one can see me’ and they reach over the barrier and feel the bones.”

Overall it was a really good experience. “I got cheap, real world credits. You get to see what it’s like to sit in on a board meeting and how people try to come by, and get their agendas passed. If you’re looking to go into museum work, it would be excellent. Even though I’m not specifically interested in working in a museum after graduation, I enjoyed my time. Something students interested in internships should know is people in the real world are pretty cool. Don’t be intimidated, they like college students. They are professionals at what they’re doing, so when you walk in thinking ‘I don’t know what I’m doing, I don’t belong in this hierarchy, I don’t know how I relate to these people,’ just do all you can as well as you can and that will be of worth to them.”

When asked if there was any other advice he’d give to history majors, Nick said, “Obviously you have to go in with the right attitude; mine was an unpaid internship, but don’t let that get to you. There were times that you would think ‘I don’t owe them anything, I’m sitting here doing grunt labor for free.’ If you go in with that attitude, you won’t go anywhere. So, I would say you have to check your attitude if you find yourself doing something like that, just take a breather.” Nick’s time at the Panhandle-Plains Historical Museum was also marked with the reminder that people in history were still real people. He felt that sometimes when you’re a student you can sometimes disconnect that the people you’re studying lived just as we do.“Going and doing research such as looking up the preferences on sardines, the minutiae like that, helps you realize that people were people and that’s important not to lose sight of.”