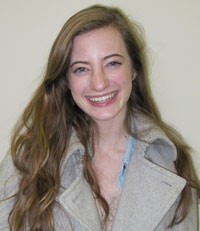 During the summer of 2011, Brie McGuire Stoltzfus (Class of 2014) was an intern at The Providence Forum, a nonprofit organization concerned with the Christian roots of the United States as well as historical education and preservation of American History. Specifically, the forum seeks to educate the general public on America’s Evangelical roots, which they feel have been overlooked and forgotten. The small organization is near Philadelphia, not too far from Brie’s home.

Brie had several responsibilities from documenting the ceremonies and process of planting thirteen seedlings from the original Liberty Tree in the original thirteen colonies to compiling information on the original liberty bell that will accompany the organization's replica that travels around the country. She also wrote an article for their newsletter that kept donors up to date on the Providence Forum’s activities and she participated in leading a tour of Philadelphia. On the tour the organization visited historic sites around downtown Philadelphia and talked about the organization's views on the founding fathers’ faith. It was an interesting experience for Brie, as she was one of two people wearing a period costume. She said she felt dumb at first, but all of the people on the tour enjoyed it and the costume proved to be a connecting point for people to come up and introduce themselves.

Of all the projects Brie worked on, the one that she found most interesting was compiling a preliminary bibliography for a book about the Sons of Liberty that is being worked on by Providence Forum’s President, Peter Lillback. She said, “I hadn’t thought about everything that really went into a book. Like I hadn’t taken into account the fact you do need to see what other people have written. I knew you had to research, but I didn’t know you would really need to see what others have said already. It’s kind of common sense actually, but the process was kind of laborious even though it interesting. It really made me realize just how much work it is to do a book.” Through this project, and other research projects she worked on, Brie went to various libraries and became more familiar with the research process, which she found beneficial.

For anyone else interested in doing an internship, Brie would say you can’t go wrong. For her, it wasn’t a life changing experience, and she’s not even sure if she holds with all of the views the Providence Forum promotes, but it helped her make connections in the historical community and it helped her learn a lot about the historical research process and working with other people. Being open to new experiences and having a good attitude served her well. She enjoyed the overall experience and learned a lot about American history!