Timothy Larsen flourished as the Fowler Hamilton Visiting Research Fellow despite challenges from the pandemic. 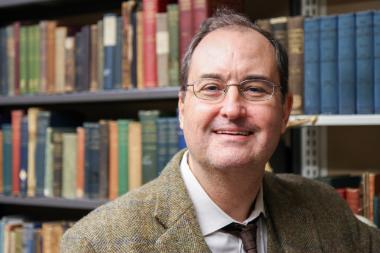 In the summer of 2021, Dr. Timothy Larsen traveled to Oxford, England, as part of his sabbatical research project. He recently spoke with us about his experience.

Wheaton College: How did the opportunity come about for you to spend a semester at Oxford? What was your purpose there?

Larsen: It was a rare and precious opportunity. Christ Church, Oxford University, is one of the most storied places of higher education in all the world. More British Prime Ministers have graduated from it than any other college. It is where they film the Harry Potter movies, including the dining hall scenes, so I told my children it is “the real Hogwarts.” They only invite one outside scholar at a time to be a Visiting Fellow, and they can be in any discipline. The person who held it before me was an expert in linguistics. It is an endowed fellowship, and the holder is called the Fowler Hamilton Visiting Research Fellow. I knew I needed to be in England for my sabbatical because my project is on Anglican chaplains during the First World War and thus I need to see lots of rare and archival sources that are only in England. I applied to be the Fowler Hamilton Visiting Research Fellow and was overjoyed when I was selected from among all the applicants.

WC: Can you tell us more about your project on Anglican chaplains?

DL: A key source for the shape of my project was a book published during the war that contained essays by seventeen Anglican military chaplains, The Church in the Furnace (1917). The soldiers jokingly renamed it “The Fat in the Fire,” so my working title for the book I plan to publish with Oxford University Press is: The Fat in the Fire: Anglican Clergymen in the Furnace of the First World War.

WC: What were the highlights of your experience?

DL: There is a tradition called “high table” in which scholars come together for fine dining – an elegant three-course meal – in the evening. It really does remind me of Hogwarts and is absolutely magical. You are engaged in fascinating conversation with some of the best minds in the world, in exquisitely furnished, historic rooms with great paintings from past centuries on the walls, eating better food than you could find at restaurant – every night.

On the research side, the personal papers of one of the chaplains I am studying that are held in archive proved much richer and more valuable to my project than I ever could have imagined.

WC: How did being there during the pandemic affect your experience? Do you feel you got the full Oxford experience despite the limitations of Covid-19?

DL: The hardest part was all the testing and proving testing which was a lot of bureaucracy, trying to navigate temperamental websites and so on. If it weren’t for the pandemic, I would have gone in January rather than June, so I missed out on a lot – but the whole world did. The college was working remotely and the archives were closed, so going earlier would have been pointless. They have kindly invited me back to enjoy life in college again in May and June 2022! In some ways, however, it was even better because of the pandemic. St Stephen’s House, Oxford, was the one library in the world that had a run of an obscure religious journal that I needed to study. They actually brought it to my apartment for me and let me keep it the whole time I was in quarantine when I first arrived. That was a much more convenient and efficient way to study it than would have been the case if there was no pandemic.

WC: Did you notice differences between how people responded to Covid-19 in England compared to America, or specifically Wheaton?

DL: England was much more serious about tracking people. People would scan in with their phones just to buy a coffee to go or something like that so that they could be traced if needed. My son came to visit me, and he was phoned by government officials on four separate occasions to see if he was doing what he needed to do in terms of the testing regime. (I think the fact that he is in his twenties made him in a target group to monitor unlike my ancient self.)

DL: I was delighted by how many leading scholars in Oxford knew of me and my work. They also often spoke highly of Wheaton. I think this kind of networking is important for letting the wider academy know of the good work that goes on at Wheaton.