Heidi is a TCK at Wheaton College who has regularly performed spoken word at our Spill The Tea events during her time at Wheaton. To learn more about her experience as a TCK at Wheaton, read her interview below.  You can also watch Heidi perform her spoken word piece called "Preparing to Lose" at the ISP YouTube page. 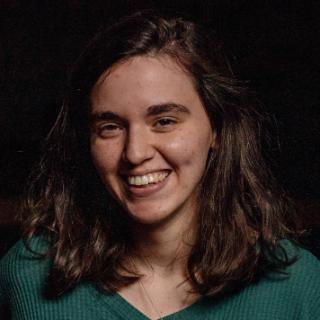 What are you studying at Wheaton College?

Community Art. It allows me to engage the arts in other fields through facilitating events and creating spaces for people to get involved in the arts.

What countries/cultures are a part of your story?

A year or two in Lithuania, majority of life in Slovakia. My dad is from Brazil and my mom was born in the U.S. but her mom is Latvian, born and raised in Brazil. My whole family is basically a mix of everything. I lived three years in Virginia, and my family currently lives in Wisconsin (we've been there since the end of 2018).

How have your experiences as a TCK impacted your life at Wheaton?

I am in an interesting position because I am an international student even though I live in the U.S. My dad is in ministry with Latinx communities right now so I still have international context and experience but I don’t deal with some of the same issues that other international students deal with (like having family that lives very far away). But by getting emails from the ISP, I’ve watched the ways they are caring for F-1 students for example; there is a great support system.

I loved coming to MuKappa and having Sunday night dinners there my first year. I even led worship there for a bit. Being a TCK has been interesting in terms of navigating hard conversations in American culture--conversations about race and politics and understanding cultural differences, as I am new to the Midwest area. I'm learning about that culture as well.

What are some ways you’ve gotten involved on campus?

The biggest one would be my involvement in the art department — I am a TA for the studio associate. I help curate and set up gallery shows. I’ve loved getting to know the inner workings of the art building and getting to know the art professors as well. I also made cartoons for the Record and was involved in leading worship for a small group that a friend of mine formed during COVID.

What are some of your favorite classes?

Tell us about a joy and challenge you’ve experienced during your time at Wheaton as an international student.

A joy has been the community and meeting other people who also understand what it feels like to be a TCK. Even outside of MuKappa, I’ve met a lot of international students who come from similar backgrounds as me. You don’t always meet as many missionary kids who grew up in Eastern Europe specifically, but I’ve met friends who are from Russia, Slovenia, even Slovakia! It’s been fun to have that space to relate to each other and make jokes that we all get.

I also really like that I am challenged to get to know American students and their situations. Something I’ve learned during my 6 years being back in the States is to recognize that just because people have grown up in the States their whole life, doesn’t mean they don’t have interesting and valuable experiences. They’re just different from mine. It’s humbling and something I want to emphasize with anyone who is moving to the States for the first time; recognizing that it is a new culture to learn from as well. It can become challenging when you get frustrated with America – politics, for instance, can be overwhelming sometimes, but I’ve appreciated having people to process that with. I know there’s a lot of resources like the Counseling Center and ISP who are equipped to serve and talk with TCKs.

What role has the ISP played during your time here? What has the international student community been like for you?

I really like that it is a welcoming community. It provides a space of solidarity and understanding. I love that the ISP lets you know that they’re looking out for you and want to help you. It's comforting for students who may be across an ocean from their family for the first time.

What advice would you give to incoming international students?

Tell us about your Spill the Tea experiences - what are your favorite ways to share your story?

Before Spill the Tea (an ISP annual event), I had never shared my poems in a public context. I love spoken word and have always wanted to do it. I had these poems tucked into my back pocket for a while. I found out about Coffee House and I love taking a break from homework and coming to them. I wanted to find a way to share my poems because they were often written out of my experiences, wrestlings, and prayers. I wanted to share what I could with those listening and hope and pray that it would minister to them and reach them where they’re at. I signed up for Spill the Tea and was very excited and nervous! I’m grateful to have a context to share about my TCK experiences where people might resonate with them. But I’m also surprised when non-international students also resonate with poems like “Preparing to Lose.” I had a lot of non-TCKs come up to me and tell me that it meant a lot to them and that always surprises me.

Tell us about the poem that you’ve chosen to share.

I always introduce this poem by saying, “This poem was written in a Home Depot parking lot, where all good poems begin.” I was sitting in the car, at a Home Depot parking lot, waiting for my family, and had just moved to Wisconsin. I was dealing with a lot of emotions about transition. I had been through so many transitional phases in the past six years and been in a space of prolonged goodbyes - floating around in an “in-betweenness” for a very long time. I was wrestling with what it feels like to say goodbye again and again and again as a TCK. We kind of forget how many times we have to do that and how tiring it can be. I wanted to lift it up as a prayer to the Lord, as both a lament and a reclamation of hope. I had the phrase, “you are going to lose” in my head, so I pulled out my phone and started speaking into a voice memo. I wrote it out, edited a bunch, and that’s how this poem became a thing.