Discovery of Excitonium of "Cosmic Significance" 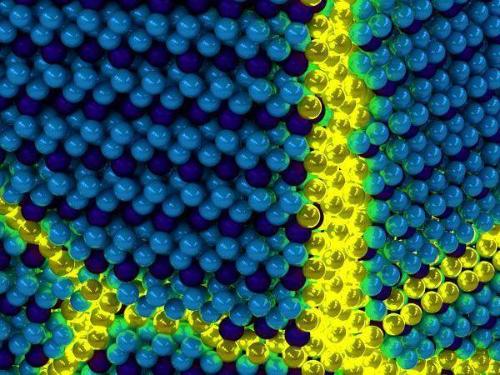 Artist's depiction of the collective excitons of an excitonic solid. The yellow sections signify the 'excitations' in an otherwise ordered solid exciton background

Excitonium is comprised of particles termed excitons Exciton particles, are composed of an electron that’s escaped and the negative space it left behind when the electron escaped. Physicists have been attempting to demonstrate the existence of excitonium since Harvard theoretical physicist Professor Bert Halperin proposed excitonium’s existence in the 1960s.

Professor of physics Peter Abbamonte and his team including Wheaton grad, Mindy Rak (Physics '13) invented an electron-scattering technique to detect excitonium. When electrons were scattered from the surface of the material used, the subsequent waves allowed the scientists to detect excitonium. the scientists call the technique used momentum-resolved electron energy-loss spectroscopy, or M-EELS. An article about the discovery was published in the journal Science.

Abbamonte, in an article in the English Independent newspaper, stated that the discovery was of "cosmic significance." He also said, "If our understanding of quantum mechanics is correct, excitonium has to exist."

The exciting physics breakthrough discovery was also reported in Newsweek.