Amy Gradin '12 has taught English and worked as an editor in Korea. 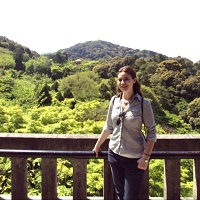 What has been your vocational path since graduation? How did you end up where you are and what was the process of getting there? Is this what you expected to be doing

After graduating in May 2012, I moved to Seoul, Korea, to be an English teacher on a one-year contract. Teaching ESL was a great experience but not something that I saw myself doing long term. So when my contract ended, I spent a few months at a Korean language institute and then got a job as an editor at a Korean publishing company. Around the same time, I also began volunteering as the treasurer for a multinational music company in Seoul. These are both things that I've enjoyed immensely, but later this summer I'll be moving again, this time to New Zealand to join my fiancé. Once there, I hope to either continue editing or to start a new career at an international business. Back when I was at Wheaton, I certainly didn’t expect my vocational path to look anything like this, but I definitely wouldn’t change any part of it.

Can you share some ways that your history major has enriched your life?

An easier question might be how my history major hasn’t enriched my life. When I was a student, I intentionally took as many world history courses as possible to supplement my International Relations major. These classes have been immensely useful to me as an American expat since my knowledge of history and global affairs has enabled me to easily understand and relate to people from many diverse backgrounds. For example, a few weeks ago I had dinner and drinks with friends from Korea, India, and Australia where we discussed the politics, culture, and religions of our countries. At another dinner with people from the U.S., India, Pakistan, Egypt, and Germany, we laughed about funny linguistic anomalies in English and other languages before talking about pop cultures around the world and their various backgrounds. In both of these conversations, all sorts of history was referenced to or brought up numerous times by everyone involved. I could give plenty of other examples since one of the main things I’ve learned since graduation is that understanding the importance of history is crucial to being an informed global citizen.

In light of your own experiences, what advice would you give to undergraduates? Do you have any advice specifically on making the most of a degree in history?

I would strongly encourage students to study history in conjunction with another major that they're interested in. There are few disciplines that cannot be enhanced by history, and an additional major is useful for those who want to study history but aren't interested in academia or teaching. Besides that, I would also encourage students to make the most of the soft skills that they learn in history classes, skills like writing well, communicating well in discussions, synthesizing large amounts of information quickly, and contextualizing issues and events within larger frameworks. Oftentimes, employers care more about their employees having these skills than about them having any specific major, so a smart student would develop them as soon as possible.